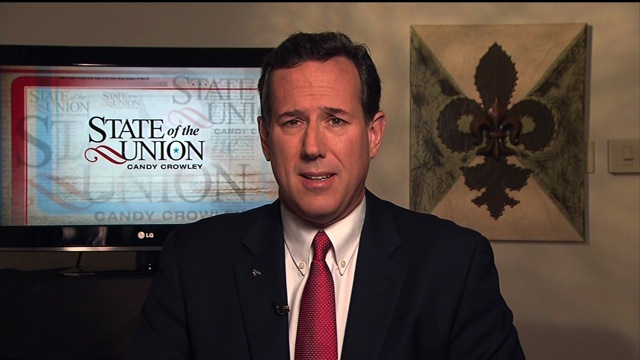 (CNN) - While Republican presidential candidate Mitt Romney touts his business experience as one of his strongest credentials, rival Rick Santorum blasted it on Sunday as a drawback.

“If Governor Romney thinks that he is the CEO of America and can run and manage the economy, he doesn’t understand what conservatives believe in,” Santorum said on CNN’s “State of the Union.”

Romney’s campaign released a new ad in Illinois on Friday attacking Santorum for having “never run a business or a state.”

Responding on Sunday, Santorum said he had experience in private sector as a lawyer, but he argued executive experience at a company is not necessary to be commander-in-chief.

“Running a business is not the same as being president of the United States,” he told CNN Chief Political Correspondent Candy Crowley.

Also Sunday, Santorum gave no indication that he has plans to drop out of the race should his campaign reach a point where the delegate math doesn't add up in his favor.

According CNN’s latest estimate, Santorum currently has 239 delegates, while Romney has 498. A candidate needs 1,144 in order to win the nomination.