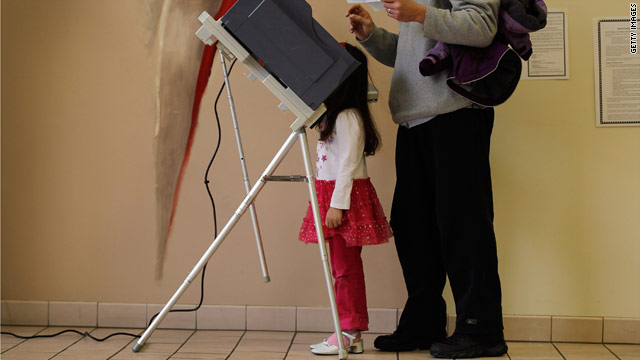 The American Research Group survey showed Romney with support from 44% of likely GOP primary voters, compared to 30% who backed Santorum. The fourteen point margin is a marked increase for Romney, who stood only four points ahead of his rival in a Chicago Tribune/WGN poll taken at the beginning of March.

The two other candidates in the race for the 2012 GOP presidential nomination trailed the leaders by a wide margin. Former House Speaker Newt Gingrich stood at 13%, and Texas Rep. Ron Paul had the backing of 8% of likely GOP voters. Four percent said they were still undecided.

Fifty-four delegates are at stake in Illinois, which holds its Republican presidential primary Tuesday.

In early voting, Romney also holds a solid lead over Santorum, according to the poll. Fifty-one percent of people surveyed who said they had already voted cast ballots for Romney, compared to 36% who said they went for Santorum.

Even among tea party supporters, Romney held a lead over Santorum, despite the perception among some Republicans that Romney is the less conservative candidate. Forty-one percent of voters who said they were supporters of the tea party backed Romney, and 35% supported Santorum.

Romney also led Santorum among both men and women, though his support among males was lower than it was among females. He had the backing of 43% of men, and 46% of women.

The ARG poll was taken March 17-18, after Santorum swept voting contests in Mississippi and Alabama, but before Romney won Puerto Rico's primary on Sunday. The poll was conducted by telephone among 600 likely Republican primary voters, and the sampling error was plus or minus 4 percentage points.