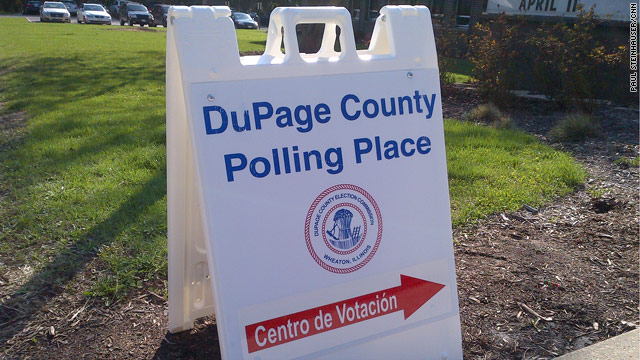 Electability issue number one for some Illinois GOP primary voters

Wheaton, Illinois (CNN) - Defeating President Obama in November - that's what is on the minds of many people voting Tuesday in the GOP presidential primary at this suburban Chicago polling station.

"Getting Obama out of the White House and getting some people in there that care," Eric Wilson told CNN.

Bill Smith agreed, saying that what was most important to his vote was "replacing the current occupant, even though he's from Illinois as well."

"I don't want to waste my vote now. I want to make sure we have a change of government come November, said Jennifer Ciombor.

Dave Sutton also wants to replace the president in the general election, and he says he has a more immediate reason.

"Since Mr. Obama went into the White House, I went out of the employment area. Now I'm driving a school bus until I can find another job. I feel Mr. Obama has only put us further in debt. I feel we need someone in there who can hopefully turn this around and get us back on a strong economy."

Wheaton is in DuPage County, just to the west of Chicago, and home to many Republicans. For many voters here, the economy of course, as well as taxes, and health care, are the issues on their minds as they cast ballots.

"My main thing is taxes. I'm in a tax bracket where I'm taxed to death, so that's basically what I was looking at," added Ciombor.

"The main thing was get rid of the health care bill that they passed. It's going to cost us more down the road. It's a joke. We don't need a Democratic in the White House," said Wilson