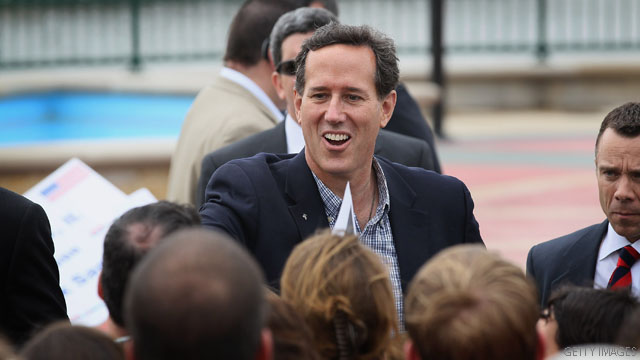 (CNN) – A new Rick Santorum radio ad uses a joke and Mitt Romney's recent comments about the English language in Puerto Rico to paint the frontrunner as inconsistent.

"A liberal, a moderate and a conservative walk into a bar. And the bartender says 'Hello Mitt.' Funny, but true," the narrator says, recycling a joke used by pro-Santorum super PAC backer Foster Friess. "You see Mitt Romney doesn't seem to have any core values, just kinda says what he thinks people want to hear."

The ad, which starts airing nationally on Tuesday according to the campaign, says Romney's comments last week about making English the official language in Puerto Rico are the latest example of his shifting stances.

"After telling us he supports making English our official language, seems old Mitt got caught in Puerto Rico telling voters there he opposes them having to learn English to become a U.S. state," the narrator says. "Where does Mitt Romney stand on issues? I guess it all depends on who he's standing in front of."

Ahead of the nominating contest in Puerto Rico, Santorum said English should be the "principle language" for the territory to be considered for statehood while Team Romney said it was not a prerequisite for the legal recognition. Spanish and English are already the official languages of the island.

Tuesday's commercial also touts Santorum's statements in Puerto Rico, saying the former Pennsylvania senator "went right in there and told them 'you want to become a state, start teaching English in your schools.'"