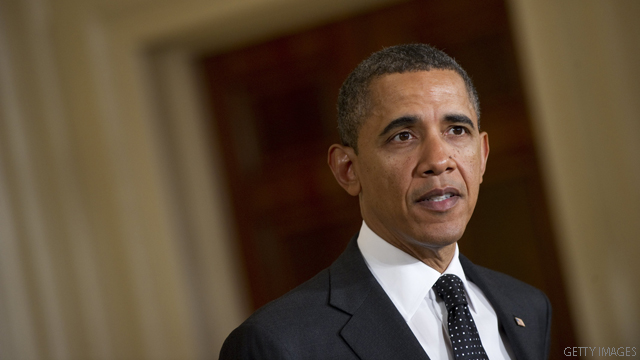 (CNN) – A survey released Tuesday delivered good news for President Barack Obama in Virginia, a large battleground state he won in 2008 and hopes to win again in November’s general election.

The poll from Quinnipiac University showed Obama leading all of the potential GOP candidates by at least eight points, including current frontrunner Mitt Romney, who Obama led 50%-42%. The president was ahead of Rick Santorum 49%-40%, Newt Gingrich 54%-35% and Ron Paul 49%-39%.

Both Gingrich and Santorum have lived in Virginia’s Washington suburbs since leaving the U.S. Congress.

Virginia Gov. Bob McDonnell, who is frequently mentioned as a potential GOP running mate, doesn’t make a significant impact on any of the candidates’ numbers in the state. When placed on a potential ticket with Romney, the Obama-Biden team still came out ahead, topping Romney-McDonnell 50%-43%.

"President Barack Obama has opened up some daylight in Virginia against his Republican challengers," Peter A. Brown, assistant director of the Quinnipiac University Polling Institute, said in a statement accompanying the poll’s release. "His margin over Romney, in the state where Obama has been struggling after his win in 2008, compares to a slight 47 – 43 percent lead in February."

Romney won Virginia’s GOP presidential primary on Super Tuesday with an estimated 60% of the vote, though rivals candidates Santorum and Gingrich did not appear on the ballot there after failing to meet state GOP requirements.

Obama's approval in Virginia stood at 49%, according to the poll. That was his best rating in the Commonwealth in almost a year.

Virginia’s closely-watched U.S. Senate race stood at a statistical tie in the new poll, with Democrat Tim Kaine at 47% and Republican George Allen at 44%. That was within the poll’s sampling error of plus or minus 3.1 percentage points. A gender split was apparent in the Senate matchup, with women backing Kaine 49%-40% and men picking Allen 48%-46%.

"Virginia's U.S. Senate race has been too-close-to-call from the get-go," Brown said in the release. "It remains a squeaker and is likely to remain that way until the November election. An Obama victory in the presidential race would help Kaine, while if the Republican carries the state in November that would help Allen."

Kaine is a former governor of Virginia and served as chairman of the Democratic National Committee from 2009-2011. Allen served as a U.S. senator from Virginia before being defeated by Democratic Sen. Jim Webb in 2006.

The Quinnipiac University poll was taken by phone March 13-18 from 1,034 registered Virginia voters, and had a sampling error of plus or minus 3.1 percentage points.