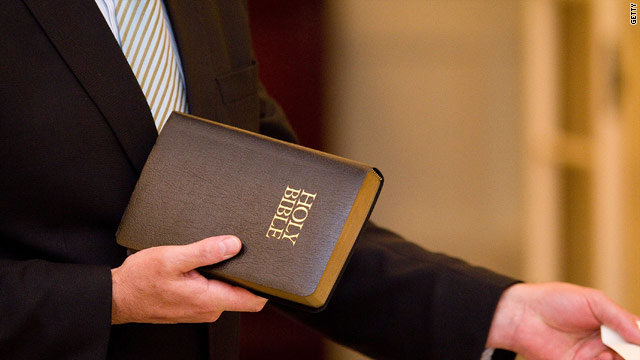 More Americans say too much religion in politics

(CNN) – For the first time since 2001, a plurality Americans say there is too much religious talk from politicians, according to a new survey released Wednesday by the Pew Forum on Religion and Public Life.

The poll showed 38% of Americans saying there was too much religious expression from politicians, compared to 30% who said there was too little. Twenty-five percent said the current level of religious rhetoric was the right amount.

Wednesday's survey was the first time since 2001 the figure for Americans believing there is too much religious talk in politics has surpassed the number who say there is too little.

Asked whether churches should be involved in politics, a majority of Americans (54%) said they should stay out. Forty percent said it was fine for churches to express political and social views.

Overall, a distinctive split appeared between Democrats and Republicans on the question of religion entering the political realm. More Democrats (46%) than Republicans (24%) said there was too much religious talk from politicians, though the number for both groups has increased since 2010.

Religion has emerged a number of times in the 2012 GOP presidential nominating process, including a debate over offering exemptions to a federal rule requiring religious institutions to provide health insurance coverage for contraception. Many GOP candidates said that rule encroached upon religious liberty.

Catholics in particular took offense at the rule, saying it forced them to act against their church's teaching.

The poll released Wednesday showed Catholics – a key voting bloc in the upcoming general election – increasing say the presidential administration of President Barack Obama in unfriendly to religion. Twenty-three percent held that view in 2012, compared to 17% in 2010.

The Pew surveyed 1,503 adults by telephone from March 7-11. The sampling error was plus or minus 3.0 percentage points.

In the survey of Republicans, 412 GOP voters were polled and the sampling error was plus or minus 6 percentage points.