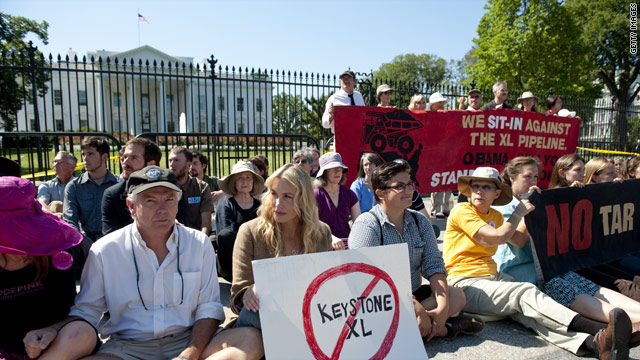 Washington (CNN) - A majority of Americans, including a plurality of Democrats, think the government should approve the building of the controversial Keystone XL pipeline, according to a new national survey.

A Gallup poll released Thursday indicates 57% of the public says the Obama administration should give the go ahead for the pipeline's construction, with 29% disagreeing and 14% unsure.

The survey's release comes as President Barack Obama brings his energy tour to a pipeline facility in Cushing, Oklahoma Thursday morning to announce he wants to speed up work on the southern end of the Keystone oil pipeline. The president still does not support work on the northern end that enters the U.S. from Canada.

Republicans have persisted in attacking Obama for his administration's January decision to reject an initial proposal for the northern segment of the pipeline that would have transported oil from Canada's oil sands south to the Gulf of Mexico. The decision followed months of protests by environmentalists who object to the considerable carbon emissions released when producing oil from oil sand.

More than eight in ten Republicans questioned in the poll give a thumbs up to building the pipeline, as do independent voters by a 51% to 35% margin. By a 44% to 38% margin, Democrats agree.

The Gallup poll was conducted between March 8 and March 11, with 1,024 adults nationwide questioned by telephone. The survey's sampling error is plus or minus four percentage points.

- CNN's Adam Aigner-Treworgy and Brianna Keilar contributed to this report.