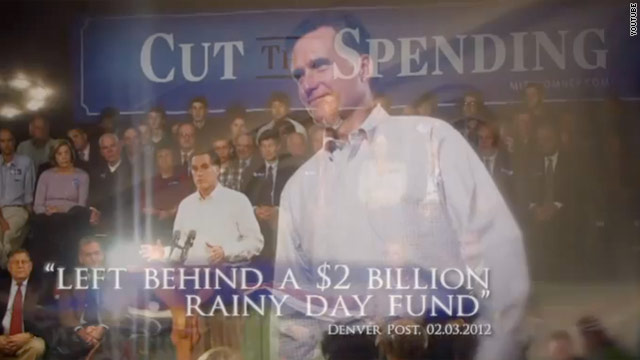 (CNN) – Mitt Romney, who acknowledged this week that the economy was improving, turned his focus Thursday to the ever increasing federal deficit in a new television ad airing in Wisconsin.

The ad highlights Romney's tenure as governor of Massachusetts, making the case his background as a corporate executive prepared him to run a fiscally-sound government.

"I spent my career in the private sector," Romney says in the ad. "In Massachusetts when I came in we faced almost a $3 billion budget gap. There were some that said 'Why don't we just raise taxes, or why don't we just borrow money?' We actually cut spending. I balanced the budget every single year, and by the time I left we had established over $2 billion of a rainy day fund."

Romney's message of cutting deficits comes after the candidate acknowledged an economy on the rebound, telling a crowd in Illinois, "I believe the economy is coming back by the way. We'll see what happens, it's had ups and downs, I think it's finally coming back."

In the new ad, Romney makes no mention of jobs or hiring, instead using the ballooning federal debt to make the point that he is the best man to guide the country to economic stability.

Romney's campaign buy is backed by millions in air support from the pro-Romney super PAC. Restore Our Future has been advertising in Wisconsin for a week already, and has purchased an additional $1 million, for a total of $2.29 million.

Their only company on the air in Wisconsin is Rick Santorum's campaign, which has purchased $54,770 in statewide cable.

Wisconsin, which holds its GOP presidential primary April 3, is uniquely positioned in terms of political messaging on debt. The state's governor, Republican Scott Walker, faced intense backlash in January 2010 when he took measures to curtail the collective bargaining rights of many of his state's employees.

Republicans in Wisconsin insisted the move was necessary to control the skyrocketing costs of public employee benefits and close the budget shortfall. Democrats argued it was an attempt to gut public-sector labor unions, one of their core constituencies.

In his ad, Romney makes the case for a business minded approach to reigning in federal spending, saying: "The principles of business work in government and it's high time to bring those principles of fiscal responsibility to Washington DC."