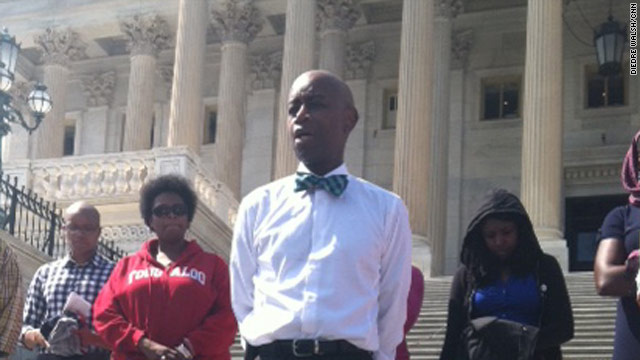 Washington (CNN) - Senate Chaplain Barry Black joined a rally organized by congressional staffers to draw attention to the death of Florida teen Trayvon Martin and recounted how he was frisked by three police officers 25 years ago while on a walk.

Black, a retired and decorated Navy Admiral who is African American, appeared at the event on the Capitol steps dubbed "Hoodies on the Hill." Aides for both Democratic and Republican members of Congress wore hooded shirts and carried bags of Skittles, candy the teen bought before he was killed while walking in a Sanford, Florida community.

Black told the story of his experience in 1987 when he had just moved to San Diego as a Navy Commander and was walking near his home when he abruptly found himself thrown on the hood of a car by the police.

Saying his mother warned him not to provoke anyone, Black said the police officer "informed me that they had received three phone calls that a suspicious person was walking through the neighborhood and they thought maybe he might be casing homes. And so that was the reason why I was being frisked without being asked for any kind of identification or anything."

When officers found his identification in his sock indicating he was a Navy Commander they reacted "with incredulity," he said.

Black, who counsels senators and aides and opens each session on the Senate floor with a prayer, was asked to lead a prayer at the end of the rally, but surprised many at the event with his personal story.

"So it is a very real challenge and the death of Trayvon diminishes us," Black told the crowd, while clutching his own bag of Skittles.

A series of young congressional aides talked about the need to continue highlighting Martin's case.

Brandon Andrews, representing a group called African American Men on the Hill, said he lived for two years in Florida and walked to work, and noted he could have suffered the same fate as Martin.

"We have a mandate, a mandate to ensure that young boys like Trayvon live their lives. That they're successful and that they have the opportunity that we have today," Andrews said."

Stretching out his hand to the sky and surrounded by young Hill staffers Black, prayed, "God, in these challenging times we need you now."

He continued praying, "You will bring positives from this negatives, you will bring good from this evil for in everything you are working for the good of those who love you and are called according your purposes."

After the event Black told CNN that he has spoken to senators who have expressed concern about the incident in Florida and believes "the entire nation has been touched by this tragedy."

He said President Obama's comments on the issue on Friday were important.

"I think the president has the bully pulpit. When he speaks out against something it has a greater impact than when someone who does not have the ethos of his position speaks out."