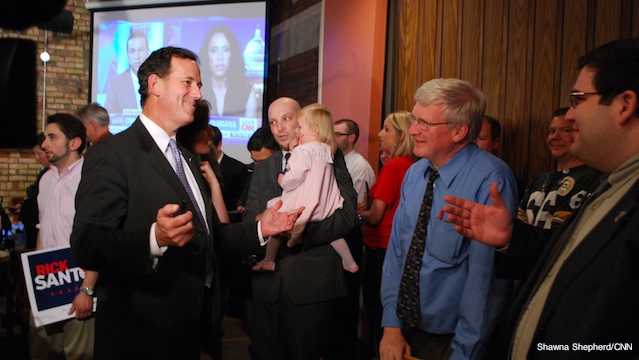 The former senator from Pennsylvania was pressed about his voting record by State Sen. Glenn Grothman between bowling strikes at Lakeshore Lanes before he decided to support the candidate. By Saturday evening, he was eating dinner with him at Titletown Brewing Co. and watching the results of Louisiana's primary unfold on television.

Earlier, CNN overheard Grothman tell Santorum that former Massachusetts Gov. Mitt Romney, whom he supported in 2008, was "probably going to win" the Republican nomination. But, said Grothman, he was going to support Santorum despite the odds.

"I don't mind jumping on board," he said.

Grothman was less candid later in an interview - and more optimistic about Santorum's chances.

The West Bend state senator received national attention after he and two legislators introduced a bill that would require Wisconsin to consider single parenthood a contributor to child abuse and neglect.

Before he threw his support, Grothman asked Santorum to explain some of his votes when he was senator, including his support of the National Endowment for the Arts and a measure that funded Planned Parenthood.

"Sen. Santorum has as conservative a voting record as there is," Grothman later told CNN. "I am not worried about that. You can always take votes out of context on a major budget worth hundreds of pages, but Sen. Santorum has been the leader of the common sense approach to government in this country for years, and I have no qualms about endorsing him."