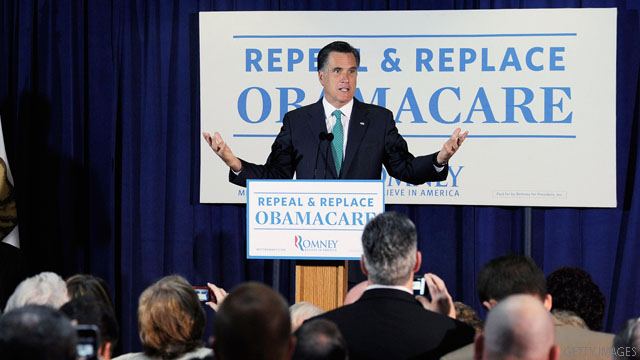 Washington (CNN) – Mitt Romney's campaign bought its first broadcast ad time in Wisconsin as it dramatically escalated its ad presence in the state.

It purchased $695,000 worth of ads that started running Saturday and will go through next Tuesday’s primary, according to a Republican media consultant not affiliated with a campaign or a super PAC who is tracking campaign ad buying.

The campaign spent $100,000 for commercials this past weekend, according to CNN's ad consultant Kantar CMAG, splitting that amount between its new positive ad painting Romney's record as governor of Massachusetts as proof of his fiscal conservatism and one attacking Rick Santorum.

The attack ad uses a clip from the CNN Arizona debate when the former Pennsylvania senator admitted he voted for bills that included funds for family planning although he personally opposed such programs. "When you are part of the team sometimes you take one for the team," Santorum said during the debate.

The stepping up of the Romney campaign's ad efforts in the state comes as both sides start focusing more attention and effort in Wisconsin with its April 3rd primary just a week away. Late last week it had only invested $34,000 for cable ads there. The Romney buy means ads will be seen throughout the state.

Mirroring the same kind of attack, the super PAC supporting Romney is spending heavily in the state with its ad also taking direct aim at Santorum. It bought almost an additional $1,000,000 for ads beginning Tuesday that will bring its total for broadcast and cable time in the state to $2,292,000.

The pac also bought another $867,000 worth of broadcast and cable ad time in Maryland, which also votes next Tuesday April 3rd, according to the GOP ad tracker. That brings Restore Our Future's total in Maryland to $1,324,000. No other campaign or super PAC has any commercials running there.

Santorum's campaign had bought only $54,770 for cable time in the state for commercials running through Monday and was trying to raise $250,000 for a new statewide cable buy.

"We need to raise $250,000 before midnight to make certain voters in Wisconsin…hear the truth about who Rick Santorum is and what he stands for," Santorum campaign senior adviser John Brabender wrote in an email solicitation Sunday.

The super PAC backing Santorum–the Red, White and Blue Fund–bought $500,000 of broadcast and cable time for commercials set to begin airing in the state Tuesday.

Earlier in the day the group had said it would commit $300,000 for ads but decided to bump up the amount.

Both the Santorum campaign and its allies hope the demographics of Wisconsin - for example, the state's large percentage of blue collar workers - could help the former Pennsylvania senator have a strong showing in a primary that is shaping up to be a key battle..