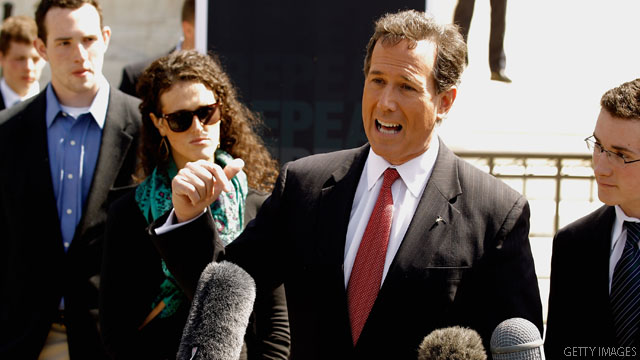 "Mitt Romney's 3,000 miles away. He should be here," the Republican presidential candidate said in an interview set to air on CNN's "The Situation Room." "He doesn't want to talk about the issue because he can't on substance disagree with the policies of this administration."

He issued a similar charge to President Barack Obama.

"He's 7,000 miles away," Santorum said of the president, who is in South Korea ahead of the Nuclear Security Summit. "He doesn't want anything to do with 'Obamacare' ... He's running away from it."

Santorum appeared in front of the Supreme Court on the first day of hearings and continued to attack the federal law and its connection to Romney.

The former Pennsylvania senator also bushed aside suggestions from the Romney campaign that a recent kerfuffle with a reporter proves he's unsuited to be president.

"After I won Louisiana by 23 points?" Santorum told CNN's Wolf Blitzer. "I understand the game but this is, you talk about desperate and pathetic, Mitt Romney can't run on his record."

–Watch the full interview with Santorum and conversations with Mitt Romney and Newt Gingrich on CNN's "The Situation Room" Monday at 4 p.m. ET. Ron Paul will appear Monday on CNN's "Piers Morgan Tonight" at 9 p.m. ET.