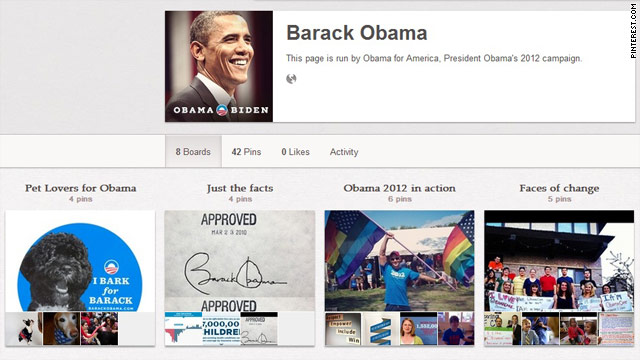 (CNN) – Anyone lacking for photos of Bo, President Barack Obama's dog, is in luck: his reelection effort has joined Pinterest, and the first dog is among several canines pinned to their "Pet Lovers for Obama" section.

The Obama campaign's presence on this social networking and content sharing website attracted nearly 2,000 followers as of late Tuesday afternoon, the day the campaign announced their presence on the site. Ann Romney, wife of Republican presidential hopeful Mitt Romney, joined the site in late February, and now has almost 5,000 followers.

Pinterest allows users to share and categorize their favorite web content. Among their first categories: Obama-inspired recipes, including the family's chili recipe and cupcakes with the president's face; photos of the first family; links to purchase campaign merchandise; and photos of Bo.