(CNN) – Marco Rubio, a senator whose name was floated first as a possible presidential, then vice presidential candidate, on Wednesday made an endorsement in the presidential race, saying, "It's evidently and increasingly clear that Mitt Romney is going to become the Republican nominee."

"We have to come together behind who I think has earned the nomination, and that's Mitt Romney," Rubio said of the former Massachusetts governor in an appearance on Fox News.
END_OF_DOCUMENT_TOKEN_TO_BE_REPLACED

(CNN) – To Mitt Romney, it was a humorous story about his father’s gubernatorial campaign and a marching band. But Democrats saw it as an illustration of an “out-of-touch” millionaire.

On a Wednesday morning conference call with Wisconsin voters, the presidential hopeful and former Massachusetts governor joked about how his father, the American Motors president who went on to be governor of Michigan, joked that a band leading his father in a parade didn’t know the Michigan fight song, but knew the one for neighboring Wisconsin.
END_OF_DOCUMENT_TOKEN_TO_BE_REPLACED 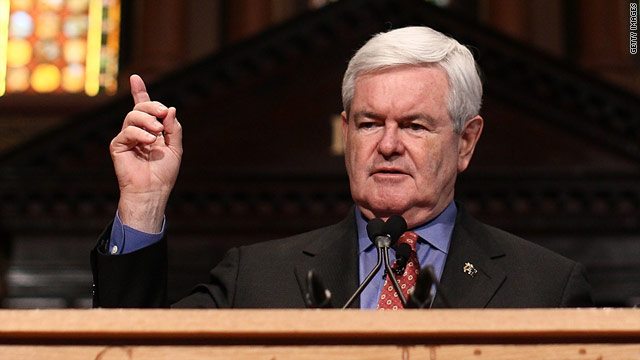 Washington (CNN) - Newt Gingrich may have a new political focus, but the focus of his ire appears to be the same.

At various times during a roughly 50-minute appearance at Georgetown University on Wednesday, the Republican presidential candidate re-stated familiar attacks on the news media, President Obama and critics.
END_OF_DOCUMENT_TOKEN_TO_BE_REPLACED

The president later explained that the political season in both countries complicated progress. Romney criticized the comments in an appearance on CNN's "The Situation Room with Wolf Blitzer."

(CNN) – Renovation plans for Mitt Romney's California beachfront home include a sub-terranian car lift, CNN Senior Correspondent Joe Johns reports. Romney's campaign says the plans are on hold until the campaign is over.

Washington (CNN) – It is not something you expect to hear on the floor of the House of Representatives – a lawmaker recounting a remarkably personal story of being raped.

Rep. Gwen Moore, D-Wisconsin, talked about what she called "terrible memories" of high school boys making a bet in the locker room that she "couldn't be had."
END_OF_DOCUMENT_TOKEN_TO_BE_REPLACED

Forget ‘Get America Working,’ Time to Get the GOP Working:

END_OF_DOCUMENT_TOKEN_TO_BE_REPLACED

Washington (CNN) - The Supreme Court concluded a marathon public debate on health care Wednesday with justices signaling an ideological divide that could topple some or all of the the sweeping reform bill championed by President Barack Obama.

On the third day of oral arguments on legal challenges to the 2010 Affordable Care Act, the justices tackled the question of what would happen if they ruled that the heart of the law, the individual mandate that is its key funding mechanism, was unconstitutional.

And a CNN/ORC International survey released Wednesday also indicates that the president's approval rating has inched over the 50% mark in CNN surveys for the first time since last May, when the polls were still registering the after effects of the death of Osama bin Laden. The number of Americans who say the economy's in good shape has jumped 13 points since January, though the survey shows a majority still think it is in poor shape.
END_OF_DOCUMENT_TOKEN_TO_BE_REPLACED