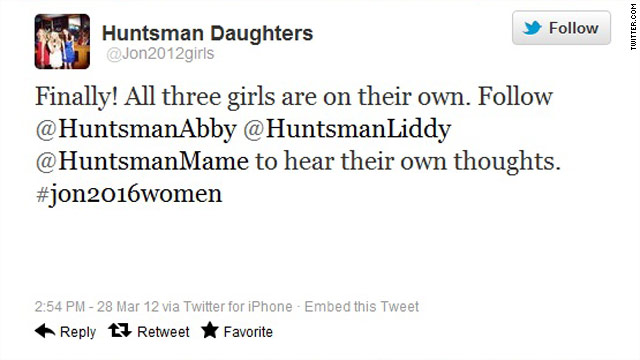 (CNN) – They are the media-genic daughters of one-time presidential hopeful Jon Huntsman: known collectively by their handle on Twitter, @Jon2012Girls.

And now, two months after their father dropped out of the GOP field, they're looking toward the next presidential season.

What could they be looking to in 2016? Huntsman, of Utah, was formerly governor of his state - and gubernatorial elections coincide with mid-term elections. (His former lieutenant governor is currently the state's governor.) First term Sen. Mike Lee is up for re-election, but he, like Huntsman, is a Republican. Could it be another presidential bid?

One of the trio, Liddy Huntsman, posted an update on her own page: "Final departure song for the @jon2012girls...@britneyspears "I'm Not a Girl, Not Yet a Woman" #2016wewillbewomen. "