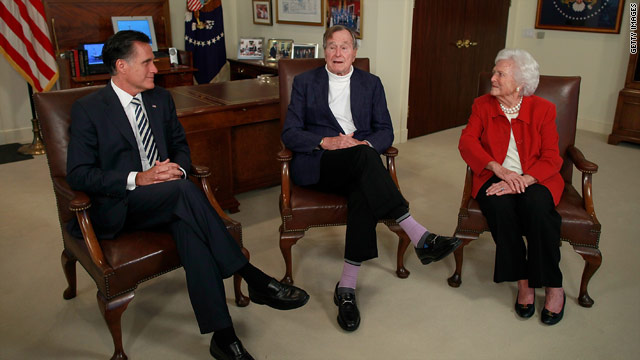 "Has he endorsed you," President George H.W. Bush asked Romney at an event in Houston, Texas, where the elder Bush announced his formal support for Romney.

"Uh, no, no," Romney replied as the former first lady Barbara Bush quickly added, "We'll talk about that."

The exchange took place as a reporter asked Romney if he had met with the younger Bush while in Texas and if he sought his endorsement.

"You know, I haven't met with President George W. Bush," said Romney. "We speak from time to time."

After Romney's answer, the elder Bush then turned to Romney and made the remark about his son's endorsement.

So far George W. Bush has not endorsed in the Republican presidential primary, but his younger brother, former Florida Gov. Jeb Bush, announced his support for Romney last week.

A recent Pew Research Center survey found that though a majority of Republican voters would not be swayed by George W. Bush's endorsement, his support was seen as the most positive among certain GOP leaders. According to the survey, 28% of respondents said they would be more likely to vote for a candidate that was endorsed by the former president.