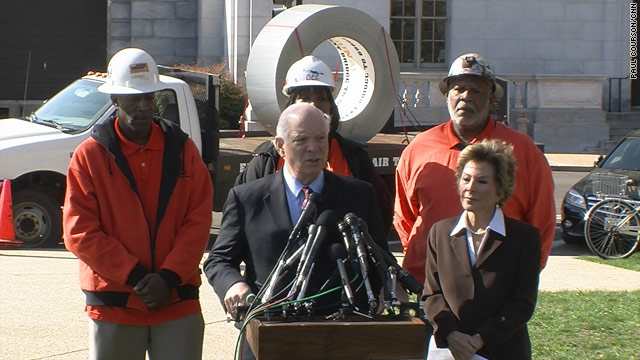 Washington (CNN) – It's not a permanent fix, nor will repairs suddenly happen to certain run-down roads, but congressional lawmakers have passed a 90-day extension of the federal transportation budget just ahead of an end-of the-month deadline.

If Congress had failed to act, funding for transportation projects would have run out. President Obama must still sign the measure.

The Senate approved the stopgap measure from the House Thursday afternoon. The Republican-led House declined to take up a long-term transportation budget previously passed by the Senate.

House Speaker John Boehner had told reporters the Senate bill had "what I'll call gimmicks in terms of how it's paid for." He added "they just run down the Highway Trust Fund to virtually zero, which is gonna, it may get 'em through the next year and a half, but it's gonna cause a very big problem when this has to be addressed again."

So apparently without enough time to craft a compromise, Boehner said the House was compelled to pass a shorter-term measure, "doing what I think is the responsible thing in meeting the statutory deadline, trying to make sure that we don't have a stoppage of construction is really important."

Earlier this week, a proposed five-year spending plan in the House was sidetracked by a failure to agree on unrelated provisions that included drilling in the Arctic National Wildlife Refuge and other energy measures.

Boehner and others expressing concern about letting highway funding expire may not have solved the problem, according to some Democrats, who believe financially-strapped state governments may not start long-term highway repairs without a long-term commitment of federal funding.

U.S. Senator Ben Cardin, D-Maryland, at a Thursday morning news conference before the votes, said his state has several major bridge and highway projects that are long-term and require a matching federal partnership. He said "a short-term extension does not allow us to move forward."

Boxer read a list of states and a tally of thousands of highway construction jobs she said would be detoured and delayed if a long term transportation bill is not passed by Congress.

In the background at the outdoor event was a flatbed truck with a large, symbolic roll of "duct tape," suggesting repairs would be haphazard with just temporary spending measures.

After the House approved only a stopgap highway bill, the White House issued a statement that said in part "it is not enough for us to continue to patch together our nation's infrastructure with short-term band-aids."

Cardin, when asked by reporters whether the stopgap spending bill could lead to slipshod repairs by states that are short on money, replied "Yes, I think it does put safety at risk," since the wording of the full legislation emphasized highway maintenance.

"A temporary extension won't get that done," he concluded, suggesting state budget authorities would consider it an uncertainty among highway repair projects that those states could not afford on their own.

– CNN's Deirdre Walsh and Dana Bash contributed to this report