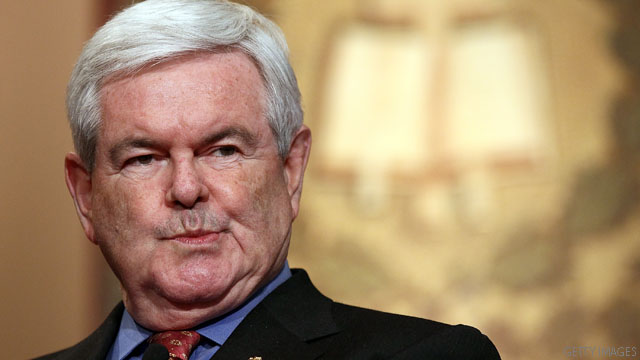 Gingrich 'at the end of his line,' top donor says

"It appears as though he's at the end of his line," Adelson said in a video posted on Youtube by the Jewish Journal Wednesday. "Because I mean mathematically he can't get anywhere near the numbers and is unlikely to be a brokered convention."

Despite his prediction of doom, the casino mogul still voiced support for Gingrich, who recently took steps to downsize his campaign following a string of electoral losses.

Adelson, who along with other members of his family channeled contributions into the pro-Gingrich super PAC Winning Our Future over the last few months, said Gingrich is the only GOP candidate in the race who's a "decision maker."

He took issue with Rick Santorum's history as a lawmaker, saying he has no experience "creating anything or taking risks."

"I know Rick, I like him, we're friendly," Adelson said following a Jewish leadership and networking retreat in Las Vegas. "But I gotta tell you something, I don't want him running my country."

The chairman and CEO of the Las Vegas Sands Corp. then compared Mitt Romney's past to that of President Barack Obama, to chide the Republican frontrunner.

"He's not a bold decision maker like Newt Gingrich is," Adelson said of Romney. "Every time I talk to him, he says 'well let me think about it' … He's like Obama."