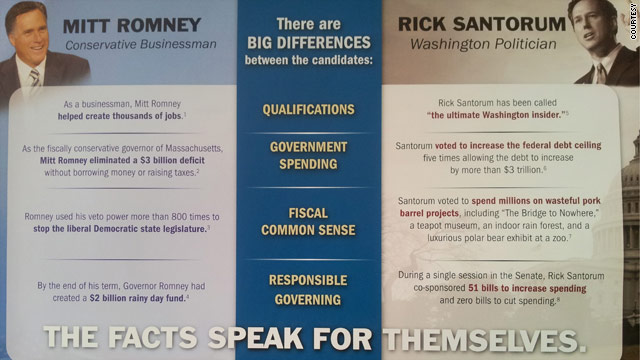 Romney and allies attack Santorum on all fronts

Washington (CNN) - Voters in Wisconsin over the last few days have witnessed a full arsenal assault on Rick Santorum by the Mitt Romney campaign and the super PAC supporting it.

A mailer from Restore Our Future, obtained by CNN, asks "What do you believe is our best path forward?" Above a picture of Romney it says "The American way" and above a picture of Santorum are the words "or the Washington way?"

The other side of the pamphlet lists contrasts between Romney and Santorum. Romney is called a "conservative businessman" who created thousands of and also eliminated a $3 billion deficit in Massachusetts as governor while Santorum is labeled a "Washington politician" who as senator supported increases to the federal debt ceiling and voted to "spend millions on wasteful pork projects." At the bottom the flier says: "The facts speaks for themselves."

The super PAC also is calling voters in the state attacking Santorum as someone who voted to fund the "ultra liberal pro-abortion Planned Parenthood." That refers to bills he voted for while he was in the U.S. Senate that included money for family planning. Santorum has said while he personally opposed those programs he reluctantly voted for legislation including them because of other things that were included.

The recorded call ends by saying a voter "deserves a leader who stands up for our principles, not a Washington insider."

The Romney campaign also is using robocalls to attack Santorum. One call says "Rick Santorum repeatedly supported big labor bosses" as well as claiming the former Pennsylvania senator "joined liberal Democrats against collective bargaining legislation," apparently referencing his vote in 1996 against right-to-work legislation that would forbid people applying for a job to be forced to join a union. It ends again trying to link Santorum to "big labor bosses."

Obviously, labor issues are a controversial topic in Wisconsin as Republican Governor Scott Walker is facing a recall election after he support a bill to effectively end collective bargaining for public employees.

Santorum has said calling him a friend of big labor is not true.

These lines of attack are coupled with an onslaught of television advertising by both the campaign and super PAC, most of which has been aimed at Santorum.

Restore Our Future's new ad, which started airing this week, uses some of Santorum's own words from a March 19th speech in Moline, Illinois when he said "I don't care what the unemployment rate is going to be. It doesn't matter to me." The commercial also highlights Santorum's votes on the debt ceiling and congressional earmarks.

Santorum's campaign previously had fought back on attacks using the unemployment snippet.

"Rick was making the point that the Santorum campaign is not based solely on unemployment rates – it's based on returning freedom and restoring this country's greatness – and it's a mistake for anyone to try and reduce the idea of America to just the 'economy.' Sadly, Mitt Romney thinks the country and this election should be reduced to math, money and spreadsheets," Santorum Communications Director Hogan Gidley told CNN last week.

Restore Our Future has used not only television and radio ads but robocalls and mailers in many of the previous primaries and caucuses as it has deployed its financial juggernaut to support Romney by touting his record and attack both Santorum and previously Newt Gingrich.

In Wisconsin Romney and his super PAC together are spending about $3,0279,000 while Santorum and the super PAC backing his bid, the Red, White and Blue Fund, so far are putting $810,310 in play, including $100,00 the super PAC just added.

That equates to an approximate 3.75 to 1 spending advantage for Romney and his allies.

The Red, White and Blue fund's ad attacks Romney for raising fees in Massachusetts by over $700 million and that his state's health care reform "served as the blueprint for Obamacare and its 1.7 trillion dollar price tag. We just can't trust Mitt Romney."