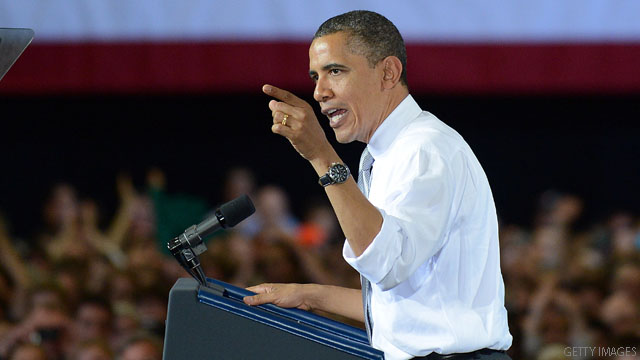 Obama: 'Change is the health care reform we passed'

"Change is the health care reform we passed after over a century of trying," Obama told a crowd at the University of Vermont in Burlington. "Reform that will finally ensure that in the United States of America no one will go broke just because they get sick."

The Supreme Court is expected to deliver a ruling on the law, which includes the controversial individual mandate, in June, after arguments from both sides were made throughout the last week.

Although he touted his administration's accomplishments during his first three years in office, including the auto bailout, the reversal of the "Don't Ask, Don't Tell" military provision and the removal of troops from Iraq, he also asked his supporters to work harder than they did in 2008.

"Here's what I want to report, that in three years, because of what so many of you did in 2008, we've begun to see what change looks like," Obama said.

The Vermont address was among a string of events Friday, the day before the last day of the first fundraising quarter.

To continue on the path of job creation, the country cannot return to the Republican policies of the past, Obama said. He took aim at Republicans, who he said advocate for a strategy of "you are on your own."

Instead, Obama said America advances when the principles of hard work take precedence.

"This is not your usual run of the mill political debate," Obama said. "This is the defining issue of our time. A make or break moment for the middle class, that's what we've got to fight for."