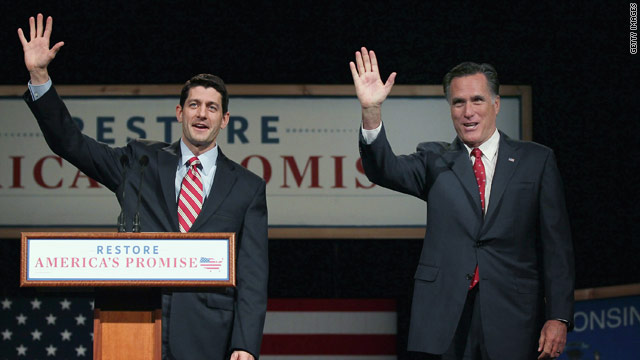 (CNN) – Whether Mitt Romney's campaign is counting down in days or hours to Tuesday's primary in Wisconsin, it isn't wasting either of them.

"The reason I'm excited about Mitt Romney's candidacy is because it's very clear to me from all of our interactions that he understands this threat to our country," Ryan said on Fox News. "And he also understands the kind of courage we need to employ to fix these problems before they get out of control."

Ryan's budget, which passed the Republican-led House this week, but is not expected to pass the Democratic-controlled Senate, proposes significant reductions to federal entitlement spending. Romney has said he would reduce federal spending by cutting anything not so "critical to our nation's future that we should borrow money from China to pay for it" - a test that he says is in sharp contrast to an "entitlement society" being pursued by President Barack Obama.

This and previous Ryan budgets have come under sharp criticism from Democrats, though Ryan is well liked in the first district of Wisconsin, which he won with 68% of the vote in his last election.

Ryan's endorsement could help Romney in Wisconsin, where polls show him in front of the GOP pack. Romney lost the previous contest, last Saturday's Louisiana primary.

He met with rival presidential candidate Newt Gingrich ahead of that vote, and Romney said the two "speak from time to time."

"I speak with Senator Santorum and Ron Paul from time to time," too, he said. "We get along on a very personal basis. We recognize that we're in the middle of a very challenging primary, but we're going to come together. There's no question in my mind but that you're going to see these four people come together and support whoever our nominee is."

Sitting beside Ryan, Romney brushed aside a question about which of this week's two major congressional endorsers he would favor as his No. 2.

But instead of either Ryan or Sen. Marco Rubio of Florida, Romney suggested – with a chuckle - former President George H. W. Bush, who gave his official nod to Romney on Thursday. Bush, who served as vice president under President Ronald Reagan, has more experience, Romney and Ryan agreed.

– CNN's Gregory Wallace and Kevin Bohn contributed to this report.