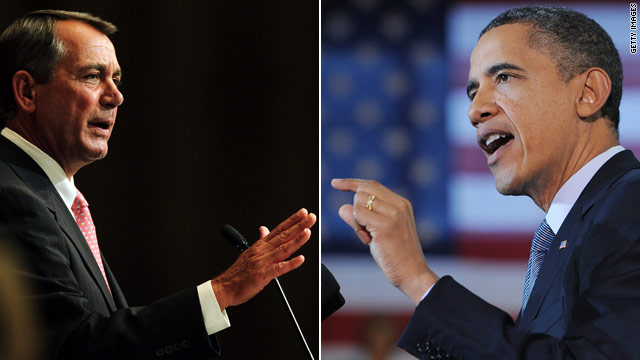 President Barack Obama and House Speaker John Boehner, a Republican from Ohio, spoke about proposals to help middle-class families, urging the opposing party to join theirs to find solutions.

Obama boosted the "Buffett Rule," a proposal to end Bush-era tax cuts for wealthy individuals, or, as Democrats describe it, would "ask some of the wealthiest Americans to pay their fair share."

"Now, if this were a perfect world, we'd have unlimited resources. No one would ever have to pay any taxes, and we could spend as much as we wanted," Obama said.

But that is not the case, and middle-income individuals are over-burdened, he said.

"Do we want to keep giving tax breaks to the wealthiest Americans like me, or Warren Buffett or Bill Gates - people who don't need them and never asked for them?" he asked.

He said Congress will soon vote on the rule, which he highlighted in his State of the Union address in January. Boehner touted the budget his chamber passed along party lines Thursday, and criticized what he considers a logjam in the Democratic-controlled Senate.

"The budget, I'm sorry to say, is just the tip of the iceberg," he said. "The Senate has stalled dozens of House-passed bills, several of which would implement the Republicans' 'all-of-the-above' energy strategy to address rising gas prices and help create jobs. All of these energy bills passed with bipartisan support. Many are backed by the president's own jobs council."

He said the president's influence is partly to blame for what he sees as inaction, and called on Obama to push for legislative action.

"So today, I'm challenging President Obama to make good on his rhetoric and urge the Senate to allow a vote on bipartisan, House-passed energy bills," he said.

But Democrats argue it is a two-way street, and point to an energy measure that stalled in the Senate on Thursday at Republican hands. It was a Democratic-backed plan to end tax subsidies to oil companies, and use that money for deficit reduction and clean energy projects. Like the GOP budget, it was not expected to pass.

This week, Congress is in recess for spring break after passing several bills which the White House has said it would sign.

The addresses come after a busy week for the president.

As he attended a nuclear security summit in South Korea, Obama's health care legislation - considered the signature legislation of his presidency - dominated headlines this week as the U.S. Supreme Court heard arguments about its constitutionality.

The Supreme Court now retreats from the spotlight to make decisions that could topple some or all of the sweeping health care reform bill.