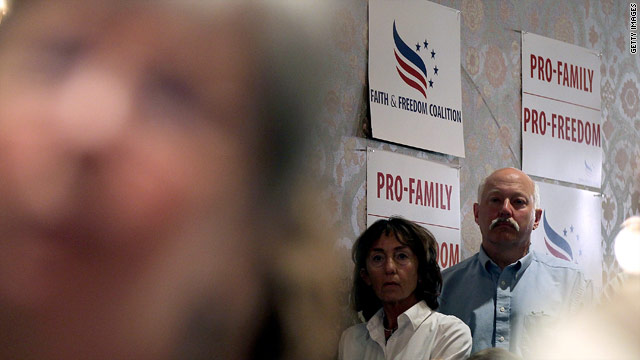 (CNN) – The three leading GOP presidential hopefuls have their disagreements, but on Saturday rallied around the role of Wisconsin, and faith voters there, in their party’s primary.

Mitt Romney, Rick Santorum and Newt Gingrich described the 2012 contest as pivotal, and the Obama administration as antithetical to religious freedom at an event held by the Wisconsin Faith & Freedom Coalition.

They criticized the health care reform law proposed by President Obama as an assault on religious liberty, and invoked the Declaration of Independence’s affirmation of “self-evident” truths and that “all men are created equal, that they are endowed by their Creator with certain unalienable Rights.”

“I believe they chose in those few words and in those principles a vision for America that would make us unique and exceptional in the world,” Romney said of the Declaration signers. “Those rights and what's associated with them, I believe, are what made America what we are. And today those rights are under attack by this administration which is one more reason we have tot to replace this administration.”

But Romney’s criticism of the president’s health law was met with skepticism from Santorum, who has called Romney the “worst Republican” to face Obama because of a health law he signed as governor of Massachusetts.

“If we make this the centerpiece - the repeal of Obamacare the centerpiece of our election - and have someone who can go out and make the arguments, because, well, I never supported those arguments ever – ever - as a public official or outside of government,” Santorum said.

“If you want Obamacare repealed. . . then we can't reply on the Supreme Court,” he continued, citing several challenges to the law which were heard by the U.S. justices this week. “We have to rely on people who stand up and fight for freedom.”

Gingrich hammered the president broadly for attempting to change “American civilization as we have known it.” The former House speaker trials Romney and Santorum in the GOP delegate count, and on Saturday acknowledged that he did not expect an easy race.

“Callista and I talked about it a long time, and we knew it would be very hard, but we decided that running for president mattered because it was an opportunity to take to the American people fundamental basic decisions about who we are and what we have to do,” Gingrich said.

The April 3 votes in Wisconsin, Maryland, and the District of Columbia are the next stops on the GOP campaign trail. Recent polls show an edge for Romney in the Badger State, which has 42 delegates at stake Tuesday.

At the forum, Romney reiterated a pledge to “defund Planned Parenthood” as president, a comment which Democrats sharply criticized and a Romney advisor later explained referred to federal funding for the private organization.

He also skewered Vice President Joe Biden for suggesting a world-wide minimum business tax rate would help level the globalized marketplace and told stories of “everyday,” inspirational people whom he had encountered on the campaign trail.

U.S. Rep. Paul Ryan, R-Wisconsin, recalled his own common-man roots – including past jobs flipping burgers and selling bologna – when explaining what his Wisconsin brethren should also see in Romney, who picked up Ryan’s endorsement on Friday.

“I have nothing but good things to say about these men. But when I look at the vote I have as a Wisconsinite to make on Tuesday, what goes thought my mind is, who is going to be the best president?” he said. “In my humble opinion, that person is Mitt Romney.”

Romney also stands as the best opportunity for a GOP victory against the president, Ryan said, and although the “primary has been helpful,” he suggested ongoing GOP struggle was becoming “counter productive.”