"She'll reveal a different side of her than you've seen before," the morning show's website boasted Sunday.

(CNN) - In one of the most closely watched Senate contests, a new poll indicates Republican Sen. Scott Brown and Democrat Elizabeth Warren are still running neck-and-neck in the race for the Massachusetts seat.

Brown, a first-term incumbent, has the support of 37% of voters, while his opponent carries 35%, according to a survey conducted by the University of New Hampshire Survey Center and released by The Boston Globe on Sunday.
END_OF_DOCUMENT_TOKEN_TO_BE_REPLACED

Washington (CNN) - Consistently defiant rivals are doing little to hamper Mitt Romney's momentum ahead of nominating contests on Tuesday in what is shaping up to be more of a general election fight between the former Massachusetts governor and President Barack Obama's re-election team.

Rick Santorum and Newt Gingrich on Sunday insisted they will stay in the race until a candidate reaches 1,144 delegates - the necessary threshold to win the Republican presidential nomination - while acknowledging Romney currently has the advantage.

He'd recently predicted a win in the state, and – while Romney waited backstage to speak to a Milwaukee audience Sunday morning at a pancake brunch – Rep. Paul Ryan, one of the state's leading Republican officials, was enthusiastically introducing him onstage.
END_OF_DOCUMENT_TOKEN_TO_BE_REPLACED

“He’s dedicated toward solving those problems. He is ready, willing and able to lead this nation, unlike President Obama. So today I’m happy to announce my full support and my endorsement of Gov. Romney to be the next president of the United States,” Johnson said on NBC’s “Meet the Press.”
END_OF_DOCUMENT_TOKEN_TO_BE_REPLACED

(CNN) - Vice President Joe Biden defended President Barack Obama on Sunday, saying the president was only stating "the obvious" in his "hot mic" moment with the Russian president earlier this week.

"The idea that in this election year we're going to be able to deal with an agreement with the Russians on further reducing our nuclear arsenals ... is difficult," Biden said on CBS's "Face the Nation."
END_OF_DOCUMENT_TOKEN_TO_BE_REPLACED

Labeling Romney's words as "dated," Clinton said in an interview with CNN there were more pressing matters of concern in global affairs.
END_OF_DOCUMENT_TOKEN_TO_BE_REPLACED 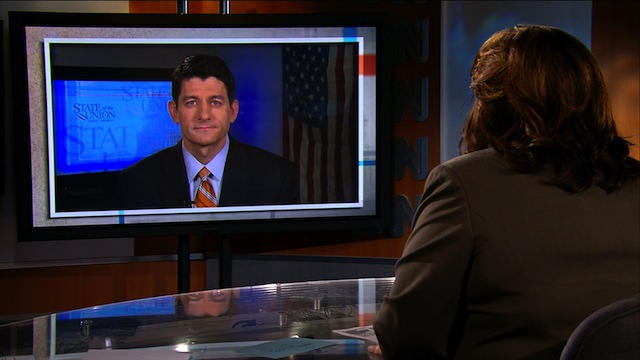 (CNN) - Anticipating a win for Mitt Romney in Wisconsin, House Budget Committee Chairman Paul Ryan on Sunday predicted the contest in his home state would close the deal for the candidate moving forward.

“If Romney gets a big delegate count, which I think he'll get, we believe as conservatives we should coalesce around our nominee and focus on the task at hand, which is the fall election, and not drag this thing out,” Ryan said on CNN’s “State of the Union.”
END_OF_DOCUMENT_TOKEN_TO_BE_REPLACED

McConnell: Romney will be an ‘outstanding’ nominee

“I think he's going to be an excellent candidate, and I think the chances are overwhelming that he will be our nominee,” McConnell said on CNN’s “State of the Union.”
END_OF_DOCUMENT_TOKEN_TO_BE_REPLACED

(CNN) - House Budget Committee Chairman Paul Ryan said Sunday he misspoke earlier in the week when he accused military officials of not being honest about the Pentagon budget.

“I really misspoke,” Ryan said on CNN’s “State of the Union.” “I didn’t mean to make that kind of an impression. So, I was clumsy in how I was describing the point I was trying to make.”
END_OF_DOCUMENT_TOKEN_TO_BE_REPLACED