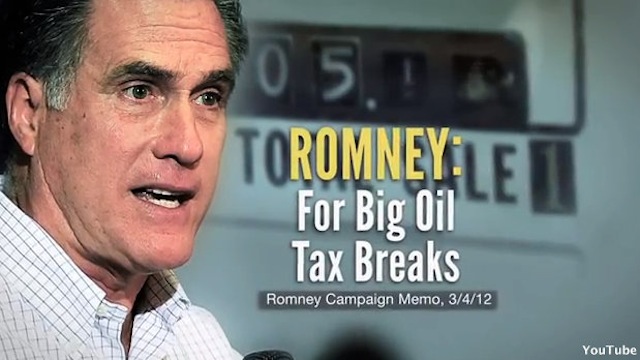 Aimed at countering attacks on the president’s energy policies, the commercial marks the campaign’s second major ad buy and will air in six key battleground states. The Obama campaign ad purchase totaled about $1.1 million, according to a non-affiliated media consultant familiar with campaign ad buys.

“Under President Obama, domestic oil production’s at an eight-year high,” the ad’s narrator says. “So why is Big Oil attacking him?”

The 30-second spot responds to the American Energy Alliance, which last week spent $3.6 million in eight states on a commercial that blames Obama for higher gas prices.

The commercial also points to a measure pushed by the White House last week that called for an end to tax breaks for major oil companies. The bill, however, failed to get the needed 60 votes to pass in the Senate on Thursday.

Pivoting to draw a contrast with Republicans, the ad mentions Romney by name and accuses the GOP front-runner of “standing with big oil” and “attacking higher mileage standards.”

According to the campaign, the ad will run in Colorado, Florida, Iowa, Nevada, Ohio and Virginia—all likely swing states in the fall. The largest purchase came in Florida, where the campaign will spent $500,000 to air the spot.

The ads indicates the latest sign that Democrats and the Obama campaign consider the general election already underway, with Romney as the presumptive Republican nominee.

Earlier Monday, Obama himself hit back against Romney’s recent argument that the president has lost sight of “American exceptionalism.”

"It's worth noting that I first arrived on the national stage with a speech at the Democratic convention that was entirely about American exceptionalism,” Obama said during a White House press conference, though without mentioning Romney’s name. “And that my entire career has been a testimony to American exceptionalism."

Reacting to the Obama campaign’s new ad, Romney’s team argued on Monday the president was trying to “deflect” from high gas prices.

“It’s no surprise President Obama is spending his soon-to-be $1 billion war chest to attack Mitt Romney and deflect blame for his failure to control gas prices. His own Energy Secretary, Steven Chu, said in 2008 that we have to find a way to get the price of gas up to the level in Europe. It looks like he’s succeeding, and, unfortunately, the American people are worse off for it,” Romney spokesperson Andrea Saul said in a statement.