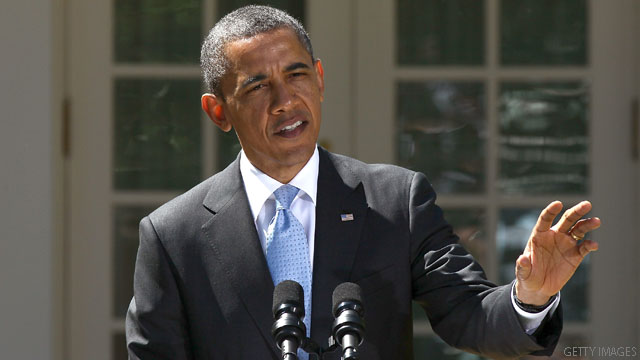 Washington (CNN) – President Barack Obama gave the GOP a pass on Monday when asked about a recent comment from Mitt Romney that questioned the president's commitment to American exceptionalism.

"It's still primary season for the Republican Party, they're gonna make a decision about who their candidate will be," Obama said during a press conference at the White House after Romney was quoted by a reporter. "I will cut folks some slack for now because they're still trying to get their nomination."

But he also defended his record, referencing his speech at the 2004 Democratic National Convention, which proved a turning point in his political career.

Romney, who channels his ire toward the president more than his Republican rivals, said on Saturday the incumbent president "doesn't have the same feelings about American exceptionalism that we do."

"And I think over the last three or four years, some people around the world have begun to question that. On this Tuesday, we have an opportunity – you have an opportunity – to vote, and take the next step in bringing back that special nature of being American," Romney said while campaigning in Wisconsin.

On Monday, Obama also defended another sticking point for Republicans on the campaign trail, the national health care law, the constitutionality of which was challenged before the Supreme Court last week.

When asked how he would guarantee Americans have health insurance if the individual mandate is struck down by the high court, Obama suggested judicial activism would be to blame for a decision overturning the law.

"Ultimately I'm confident that the Supreme Court will not take what would be an unprecedented extraordinary step of overturning a law that was passed by a strong majority of a democratically elected Congress," Obama said.

Critics of the law argue the individual mandate provision of the law is unconstitutional, but Obama said requiring individuals to have health insurance is the only mechanism to ensure individuals with preexisting conditions "actually get health care."