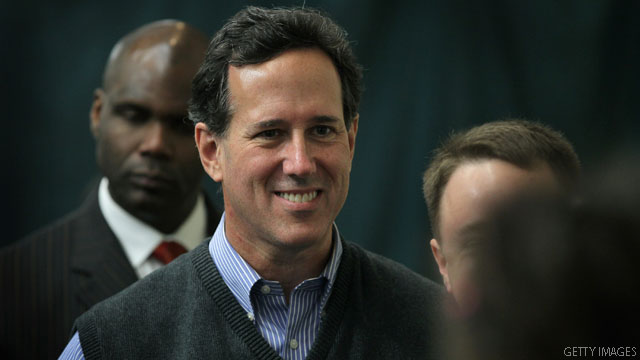 The former two-term Pennsylvania senator on Monday said he could "absolutely" guarantee a win in the state, but that it's a "tough state."

"We actually were part of the movement to change the Republican Party in Pennsylvania to a much more conservative party, and we've been successful winning elections doing that," Santorum said on Fox News.

Santorum lost his re-election fight in 2006 to Democrat Bob Casey by an unprecedented 18 percentage points.

The most recent poll out of the Keystone State from Franklin and Marshall College showed Santorum and Mitt Romney statistically tied for the top spot among likely primary voters ahead of Election Day on April 24.

Despite his uphill delegate climb and falling poll numbers in the 2012 campaign, Santorum has vowed to remain in the race until a candidate reaches 1,144 delegates, the necessary number to clinch the GOP presidential nomination.

With a strong showing in Tuesday's three contests increasingly unlikely, Team Santorum has said they will focus on Pennsylvania and May's elections, which include the southern states of Texas, Arkansas, North Carolina and Kentucky, among others.