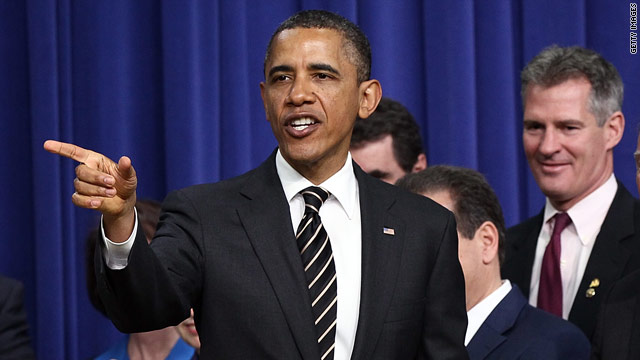 Brown appears with Obama, linked to Romney in video

(CNN) – Sen. Scott Brown's Wednesday morning appearance alongside President Barack Obama didn't go unnoticed by his rivals in the Massachusetts Democratic Party, who seized upon the opportunity to link the GOP senator to another presidential candidate: Republican Mitt Romney.

Brown joined Obama at the White House signing of the Stop Trading on Congressional Knowledge (STOCK) Act, which prohibits members of Congress and their staffs from using non-public information for financial gain.

Brown and Obama briefly spoke about the measure following the president's State of the Union address in an exchange that was caught on camera. While Brown helped write the Senate version of the legislation, the law Obama signed Wednesday was a more watered-down version passed by the House of Representatives.

In his reelection bid against former Obama adviser Elizabeth Warren, Brown is hoping to appeal to more moderate Republicans that form the base of the GOP in Massachusetts. The traditionally blue state has voted for a Democrat in presidential elections since 1984.

Democrats in the Bay States, eager to paint Brown as more conservative than his campaign portrays, released a video Wednesday splicing together video clips of Brown with the Republican presidential front runner, Mitt Romney. Romney is the former governor of Massachusetts.

The video uses clips from Brown's 2010 Senate campaign, when Romney endorsed the then-state senator and campaigned for him in Massachusetts. At one point, Brown describes Romney as a "very, very dear friend," and Romney describes being mistaken for Brown in an airport.

For their part, Massachusetts Republicans marked the signing of the STOCK Act by calling for Warren, Brown's opponent, to return campaign donations from billionaire financier George Soros, who they point out was charged in a European court in 2002 of insider trading. Soros has since appealed the charge.

"Scott Brown deserves credit for taking a leadership role in closing an ethics loophole with legislation that bans members of Congress from insider trading," Alleigh Marre, spokeswoman for the MassGOP, said in a statement. "Now, Elizabeth Warren needs to demonstrate her commitment to ethics in government by returning tainted campaign contributions from convicted insider trader George Soros and his family."