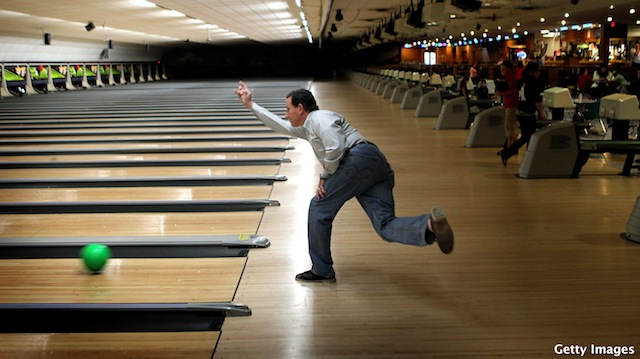 Mechanicsburg, Pennsylvania (CNN) - In this contest, Rick Santorum enjoyed having three strikes against him.

With a trio of “X’s” next to his name, the Republican presidential candidate dominated a game of bowling against a small group of family and staffers Wednesday night in Mechanicsburg, Pennsylvania.

Clad in a cream and black bowling shirt – embroidered with “Rick 2012” at his chest - Santorum showed off his bowling prowess: carefully grabbing his bowling ball, steadying his gaze and knocking down pins with near precision.

The candidate suffered a trio of primary losses in Wisconsin, Maryland and the District of Columbia to Mitt Romney, his chief rival for the Republican presidential nomination. That prompted growing calls for Santorum to exit the race.

Earlier Wednesday, the candidate vowed to continue. Santorum even warned that negative attacks from Romney supporters would fall short in Pennsylvania, where Santorum served two terms as senator until 2007.

Just before bowling, Santorum attempted a knockdown of a different kind.

On a day of repeated questioning about when and if he may get out of the race, reporters asked the candidate, yet again.

“All these folks asking questions every five minutes, ‘When are you going to get out of the race?’ for the last week. And yet, [Romney] only won by just a handful of points [in Wisconsin],” Santorum said.

“I mean, for me the story is why is he not just blowing the doors off this thing? And why is it that we're able to hang in there. And the reason is, is the reason we are going to do well here in Pennsylvania: folks want someone that they can get excited about, who they can trust, who they think is authentic, who can battle Barack Obama and effectively defeat him in the general election.”