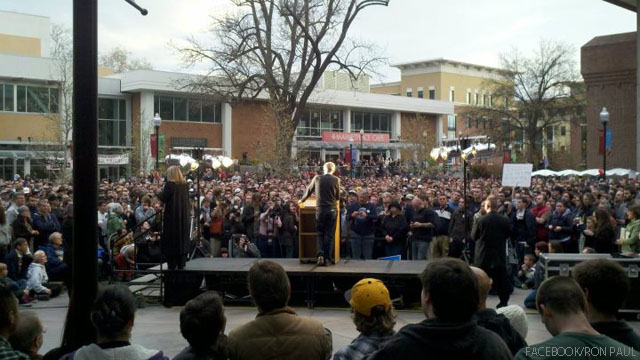 Paul can still draw a crowd

And his campaign is making sure the media is aware.

The Republican presidential candidate drew an approximately 5,800 person crowd at a campaign rally at the University of Los Angeles Wednesday night, according to a press release from the Texas congressman's campaign.

He held another 6,000-plus event Tuesday night at a town hall meeting at California State University at Chico, the campaign proudly announced.

The 12-term congressman is popular among younger voters and often frequents college campuses.

Paul, who is making his third bid for the White House, currently has 71 delegates, behind Mitt Romney's 657, Rick Santorum's 273 and Newt Gingrich's 137. He would need to win 96% of the remaining delegates to reach the 1,144 representatives necessary to clinch the GOP nomination.