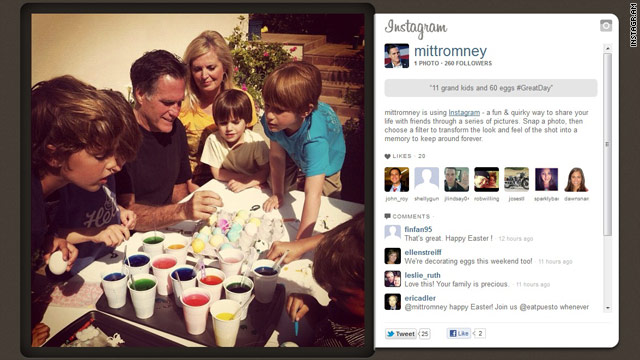 Mitt Romney decorating Easter eggs with his wife, Ann, and grandchildren, in a photo posted online by his campaign.
April 7th, 2012
06:00 AM ET

(CNN) – President Barack Obama and his chief Republican rival put politics aside this weekend to mark the Passover and Easter holidays.

Obama described Easter - when Christians celebrate the suffering, death and resurrection of Jesus - as an inspiring occasion.

For all of "the triumph of hope over despair. Of faith over doubt. The notion that there is something out there that is bigger than ourselves," he said.

Mitt Romney, the likely Republican nominee expected to face Obama in the November election, also issued a statement Friday recognizing the start of Passover, the week-long celebration of the anchient Jewish people's exodus from slavery.

"This ancient celebration of freedom reminds us that free people everywhere have a stake in ending oppression," he said. "Ann joins me in wishing everyone sitting down for a Passover Seder a joyous time with family and friends."

In a separate Easter statement, Romney recognized the religious significance of the day and commended those serving in the military.

“As we take time off of the campaign trail to gather with family and friends this Easter weekend, we celebrate the Resurrection of our Lord Jesus Christ and the hope which he brought to all of mankind," he said. "We are thankful for our brave men and women in uniform who are serving our country in the armed forces and are away from their families on this special day and we pray for their safe return home. And may the hope and promise which we celebrate at Easter remain with all of us throughout the year.”

Obama hosted a Seder at the White House, and Romney posted online a photo of he, his wife, and several of their grandchildren decorating Easter eggs.

Romney and other GOP presidential contenders took the weekend off from the campaign trail.

"This is a very special tradition, and it's one that I'm proud to be taking part of tomorrow night at the fourth annual White House Seder," he said in an online video posted Thursday. "Led by Jewish members of my staff, we'll retell the story of the Exodus, listen to our youngest guests, ask the four questions, and, of course, look foward to a good bowl of Matzah Ball Soup."

In the Republican weekly address, Oklahoma Gov. Mary Fallin kept up pressure on Obama, saying she was "surprised to hear the president say he supports an 'all of the above' energy policy" during a recent visit to her state.

"The bottom line is this administration is taking credit for American energy production while it works to aggressively undermine it," she said.

She criticized him for blocking the northern stretch of the Keystone XL pipeline, claiming credit for the southern portion and restricting domestic oil drilling. The administration rejects all the claims.

But as energy and gas prices are economic issues, the presidential candidates are expected to continue addressing them on the campaign trail. Congress is in recess for a second consecutive week.

The president hosts the annual White House Easter Egg Roll on Monday and speaks on the so-called Buffett Rule on Tuesday in Florida. On Friday, he will head to the South American nation of Colombia for an international summit.