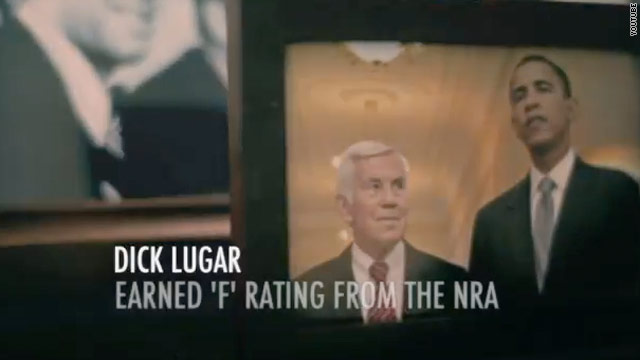 The group has endorsed Lugar's challenger, Indiana state treasurer Richard Mourdock, ahead of the May 8 GOP senate primary. The race against Mourdock has seen Lugar, a six-term veteran of the U.S. Senate, challenged by tea party groups and others who proclaim him to be too moderate.

In the NRA ad, an announcer claims Lugar has forgotten his Indiana heritage after years in Washington.

"Some things shouldn't change," the announcer says in the 30-second spot. "Our Indiana values. Stewardship of the land. And the protection of our Second Amendment and hunting rights. But over 36 years in Washington, Dick Lugar has changed. He's become the only Republican candidate in Indiana with an F rating from the NRA. It's time for another change. Time to elect a senator who will protect our rights."

The NRA's assessment of Lugar as a Washington insider fits the narrative Mourdock's campaign, as well as state and national Democrats, have used to frame the contest. Lugar's residency in Indiana has been repeatedly questioned, though the senator beat back a challenge in February when the Indiana Election Commission determined he wasn't required to be a resident of Indiana to appear on the ballot – as he had been serving the state as senator while living away from the state.

In March, an election commission in Indianapolis ruled Lugar was ineligible to vote in his former precinct because he no longer resided at the address on his voter registration. Lugar has lived in McLean, Virginia since the sale of his Indianapolis home in 1977.

In their criticism of Lugar, the NRA points out the senator didn't sign onto Congressional briefs filed before the Supreme Court asserting the Second Amendment gives individual Americans the right to gun ownership. The group also points out that Lugar was endorsed by the Brady Campaign to Prevent Gun Violence in his 2006 campaign.

"Unlike his opponent, Senator Lugar, who has a clear record of hostility toward our right to keep and bear arms, all gun owners and sportsmen in Indiana can trust that Richard Mourdock will defend their Second Amendment rights," Chris W. Cox, the chairman of the NRA Political Victory Fund, said in March.