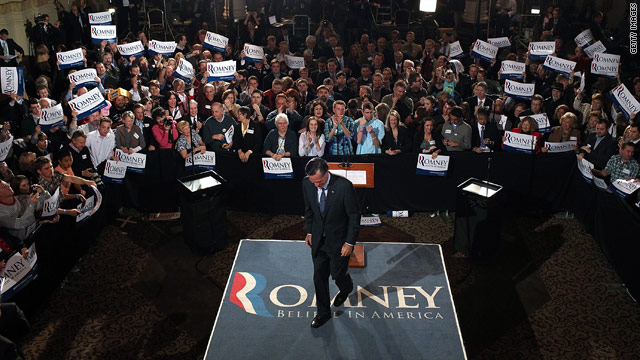 Romney said he wasn't surprised by Gingrich's sentiment, expressed over the weekend on "Fox News Sunday," that the former Massachusetts governor had all but wrapped up the GOP presidential nomination.

"It was not a surprise, he and I have spoken from time to time, and actually we have also gotten together with our wives and spoken," Romney said. "We're pretty open-eyed about this, as we talk about where we are at this stage. In all likelihood I will be the one that gets the delegates to become the nominee."

Monday's interview took place on Huckabee's inaugural radio program, which occupies an overlapping midday timeslot as The Rush Limbaugh Show, hosted by the conservative firebrand who came under fire in March for sexist remarks about a young woman. On Monday, Huckabee said his show would focus on "confronting the issues, not the listeners."

Romney said there was "no question" in his view that Gingrich would ultimately help campaign for the Republican nominee in the hopes of defeating President Barack Obama in November.

As for his closest competitor Santorum, Romney said he didn't speak with the former Pennsylvania senator as often.

"We haven't had as much interaction, although at each contest's conclusion we speak with each other," Romney said. "I call him, he calls me, we exchange congratulations. And we've had a chance to chat from time to time, and we continue to have a personal respect for one another."

Romney added he had no doubt Santorum would also help the eventual nominee campaign in the general election.

In the interview, Romney reserved his only harsh criticism for Obama, who he slammed as weak in preventing a nuclear Iran.

"This president has disrupted that relationship with Israel, by criticizing Israel at the United Nations in his inaugural address, throwing Israel under the bus by demanding we return to the 1967 borders, and then there's the personal disrespect that was shown to Benjamin Netanyahu," Romney said.