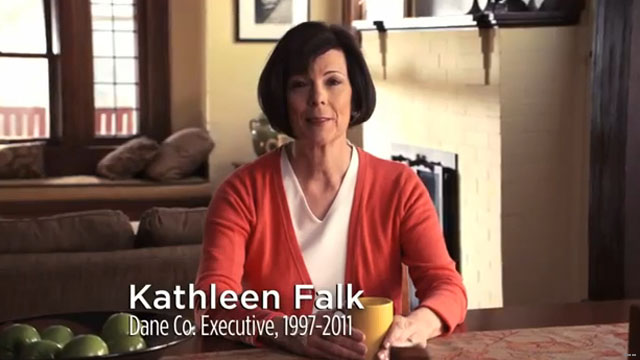 "[I] was raised on simple Wisconsin values- hard work, be honest, listen more than you talk," the former Dane County Executive said in the 30-second spot. "Today our leaders have lost sight of that. They make decisions in secret and shut the people out."

Falk will face Milwaukee Mayor Barrett, among others, in the primary May 8. The democratic nominee will take on Walker in the recall election on June 5.

The Badger State race has received consistent national attention since February of 2011 when a bill, backed by Walker, passed to curtail the collective bargaining rights of state employees. Republicans in Wisconsin insisted the move was necessary to control the skyrocketing costs of public employee benefits and close the budget shortfall. Democrats argued it was an attempt to gut public-sector labor unions, one of their core constituencies.

In addition to considerable spending from outside groups in the state, the Republican Governors Association launched two rounds of spots criticizing the policies of Walker's potential Democratic challengers who they said caused an increase in unemployment and taxes in their respective cities.

But Falk defended her record, saying she has spent 14 years brining "people together to solve tough problems."

"Together we added more jobs than any other area while holding taxes down," Falk said in the ad. "That's the Wisconsin way and that's the governor I'll be."

Falk Communications Director Scot Ross said the campaign intends to remain on television in the state until the race ends and that the candidate will refrain from attacking her opponents.

"Kathleen is running on her record and how she will bring Wisconsin back together and restore transparency, accountability and honest to the governor's office," Ross told CNN. "That's the way she's running her campaign."