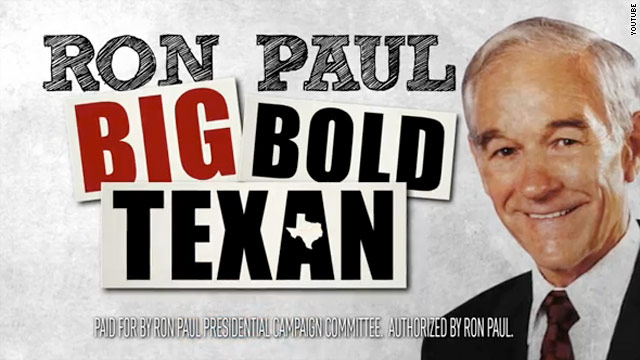 (CNN) – The GOP nomination may appear to be in Mitt Romney's reach, but Texas Rep. Ron Paul isn't leaving the race without knocking his rivals at least one more time.

In a new 30-second ad set to begin airing in Texas Tuesday, Paul hits Romney, Rick Santorum and Newt Gingrich as collectively unfit to go up against President Barack Obama in November's general election. The six-figure buy was a mix between cable and broadcast airtime.

The ad, called "Vote Texas," begins with an announcer laying out the options for Republicans: "Let's get this straight. We're debating between a big spending, debt ceiling raising fiscal liberal, a moon colony guy, a moderate from Massachusetts or a Texan with a real plan to balance the budget."

The slam against Gingrich – that he's the "moon colony guy" – comes with a "Photoshopped" image of the former House speaker in a space suit, floating around the moon.

The announcer continues, pushing Paul's platform of reigning in spending and slashing the federal debt.

"Get with it people, only one candidate will stand up for Texas. Ron Paul isn't playing games. Five federal bureaucracies gone. A trillion dollars cut, year one. Get Washington off your back," the announcer says before labeling the candidate a "big, bold Texan."

The assertion that Paul "isn't playing games" is supplemented with an image of an Etch A Sketch, a reference to a March remark from a Romney campaign aide that the GOP frontrunner would shift focus in the general election.

In a statement accompanying the ad's release, Paul's National Campaign Chairman Jesse Benton said the buy was indication of how important Texas was in selecting the GOP nominee.

"Texas has 152 delegates up for grabs on May 29th, keeping the race for the Republican nomination open," Benton said. "Ron Paul is competing hard in his home state of Texas, and we expect that Texas conservatives will reject flip-flopping Massachusetts moderate Mitt Romney and the debt ceiling raising fiscal liberal Rick Santorum."

Paul currently represents Texas' 14th Congressional district in the U.S. House of Representatives, and has represented the state on and off since 1975.