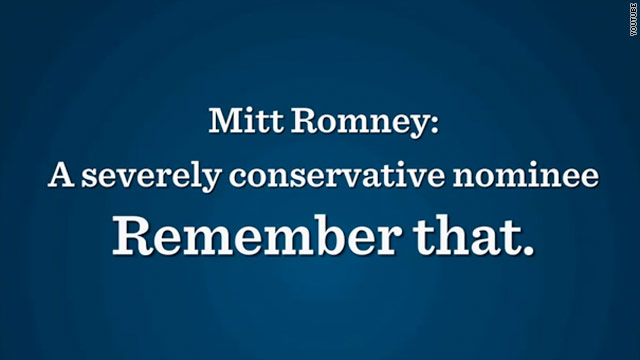 (CNN) – President Barack Obama's re-election campaign marked the conclusion of the Republican primary - and the beginning of the general election campaign - with a nearly two-minute Web video splicing together clips of Mitt Romney's most conservative statements from the trail.

The video comes at the unofficial start of the general election campaign, and highlights the effort Obama's team will make to undermine a potential shift to the middle from the likely Republican nominee.

"Expect us to keep holding Romney accountable for the positions he committed to during the primary. There will be no Etch A Sketch opportunities this year," Obama campaign press secretary Ben LaBolt said.

The video begins with an invitation to reminisce on the past several months: "As Republicans settle on the nominee, let's take a look at some of the unforgettable moments from this unforgettable primary."

What follows is a series of clips, mostly out of context, of Romney proclaiming positions that will make liberals cringe.

"Corporations are people, my friend," Romney says in the first sound bite. He made the statement in Iowa, making the point that corporate success often leads to profits for individuals.

The video continues with Romney asserting, "I like to be able to fire people who provide services to me." That comment was made in New Hampshire, and the candidate was advocating giving Americans the option of getting rid of their health insurance companies if they weren't pleased with their performance.

The Obama campaign video goes on to show Romney's now-famous proclamation at the Conservative Political Action Conference that he was a "severely conservative Republican governor," a statement made to quell fears among the GOP that he was too moderate to appeal to the Republican base.

Team Obama's video moves to a series of Romney clips featuring the candidate's remarks on reproductive rights, an attempt by the president's re-election campaign to capitalize on the growing gender gap, seen in several recent polls, between Romney and the incumbent Democrat.

Romney is shown saying at a debate that he believed the Supreme Court should overturn Roe v. Wade, and expressing support for a constitutional amendment that would allow employers to deny health coverage for contraception.

He is shown making the statement, "Planned Parenthood, we're going to get rid of that." Romney, who made that comment in March, explained he was referring to ending federal funding to the women's health provider.

The video has a section devoted to Romney's comments on the economy, using video of him saying "Don't try and stop the foreclosure process, let it run its course and hit the bottom."

Another clip shows Romney doubling down on a newspaper op-ed he wrote in 2008, saying "That's exactly what I said, let Detroit go bankrupt."

The video concludes with the tagline: "Mitt Romney: A severely conservative nominee. Remember that."

Romney's team responded to the video with a slam on Obama's economic record.

“It’s no surprise with the worst job creation record in modern history and a platform of raising taxes that President Obama would try to distract Americans from the real issues," Romney press secretary Andrea Saul said in a statement. "Unemployment is up, incomes are down and gas prices are through the roof. Mitt Romney is running to get Americans back to work and the country back on track.”

- CNN's Jessica Yellin and Paul Steinhauser contributed to this report