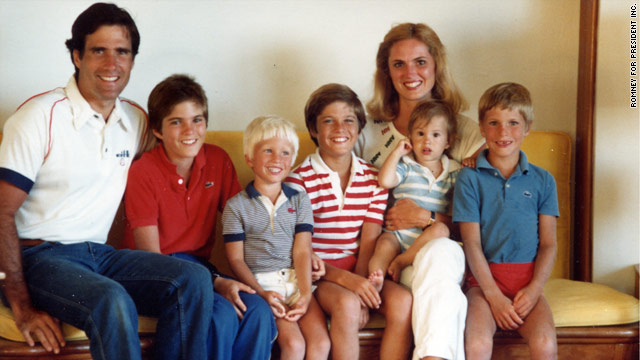 MOMENTS AGO… THE PRESIDENT ON THE PUNDIT: “I don’t have a lot of patience for commentary about the spouses of political candidates.”

STAY TUNED… What would you do if you were leading the president’s re-election campaign and the biggest gift of a calendar day, the Sixth anniversary of Romneycare, was derailed by unintentional friendly fire and a 24 hour onslaught of mom power? Tune in to John King, USA at 6:30 pm to see what David Axelrod does with the ball in his court.

TRAIL TRIVIA
(Answer below)
Who said this in 2004: “we still live in a country where there are two different Americas... one, for all of those people who have lived the American dream and don't have to worry, and another for most Americans, everybody else, who struggle to make ends meet every single day. It doesn't have to be that way.”

Back in 2004, Teresa Heinz Kerry answered a question from USA Today as to how she’d “be different from Laura Bush” with this answer, “Well, you know, I don't know Laura Bush. But she seems to be calm, and she has a sparkle in her eye, which is good. But I don't know that she's ever had a real job — I mean, since she's been grown up.”

The “real job” comment about a mom and a librarian that happened to also be the nation’s sitting first lady, even with a quick apology, cost the Democratic ticket precious news time as well as momentum in the crucial closing weeks of a campaign. The USA Today interview was weeks before the election that Bush won – and while Bush lost the female vote to John Kerry, Bush did gain 5 percentage points among women in comparison with his 2000 showing, according to the CNN Exit Poll.

Now in 2012, we are witnessing the hijacking of an entire news cycle by another unintended consequence. Hilary Rosen said this, “What you have is Mitt Romney running around the country saying, well, you know, my wife tells me that what women really care about are economic issues. And when I listen to my wife, that's what I'm hearing. Guess what, his wife has actually never worked a day in her life. She's never really dealt with the kinds of economic issues that a majority of the women in this country are facing in terms of how do we feed our kids, how do we send them to school and how do we - why do we worry about their future?” Rosen has apologized and clarified her comments, but the quickness her comments have traveled internationally has proved an interesting case study in the speed and challenge of the 2012 campaign.

Debbie Walsh, the director of the Center for American Women and Politics, says the intensity and speed of the reaction to Rosen’s comments is less about women and men, and more about the new viral world we live in, “It’s a phenomenon about information and the speed of which it is transferring. … You used to be able to change an errant quote and it went away. Now 8 million people discuss it instantly and give it more life.” Walsh also adds that this election cycle specifically has added to the uncertainty, “things can swing very quickly as we have seen already with this cycle – and this year the electorate is already volatile.”

And volatility can swing both ways. Yes, this was the day that the Obama campaign wanted to remind people that 6 years ago today Mitt Romney signed his health care bill. But, remember the day two months ago when Mitt Romney was supposed to be taking a post-Florida primary victory lap and instead he told Soledad O’Brien that “"I'm not concerned about the very poor?"

Leading Drudge: 'She has never worked a day in her life'
Ann Romney’s debut on Twitter couldn’t have come at a more opportune time. Ann’s first tweet came just moments after Democratic strategist and DNC adviser Hilary Rosen lobbed an insult at Ann Romney, suggesting that the 64-year-old mother of five and grandmother of 16 had never held a job.

Leading HuffPo: House GOP Freshmen Face Opposition From Democrats, Tea Party In Re-Election Bids
In the November 6 elections, Democrats are targeting Grimm and more than two dozen other Republican freshmen by casting them as the compromise-resistant sources of division and dysfunction for an unpopular Congress.

Leading Politico: Hilary Rosen, Ann Romney in TV faceoff
The political “war on women” turned personal on Thursday as Democratic consultant Hilary Rosen and Ann Romney took their dispute over stay-at-home moms to the airwaves in dueling TV appearances that only added more fuel to the fire over women’s career choices.

Leading New York Times: Romney Taking Steps to Narrow His Gender Gap
Mitt Romney moved Wednesday to confront one of his most vexing general election problems — how to narrow the gender gap he faces against President Obama — but his campaign immediately found itself squeezed between its intensifying efforts to appeal to women and its need to avoid alienating conservatives.

- Ann: Mitt respects a woman’s choice (not to work) -
ANN ROMNEY SAID THIS ON FOX NEWS THIS MORNING: “Mitt respects women that make those different choices. He had a lot of women in his life that have been his advisers. He listens to a lot of different women and if I get a chance I want to tell you what women are telling me and Hilary needs to know this."

- America is exceptionally rigged -
VICE PRESIDENT BIDEN SAID THIS THURSDAY AT A CAMPAIGN EVENT IN NEW HAMPSHIRE: “You know Ronald Reagan, Warren Buffett, Deadra, the president, nobody that I know, no reasonable person at least in my view thinks this is the American way. In America we're not supposed to have a system that's rigged.”

­­- Newt: Unfair and unbalanced? -
NEWT GINGRICH SAID THIS WEDNESDAY NIGHT AT A PRIVATE MEETING IN DELAWARE: “I think FOX has been for Romney all the way through. In our experience, Callista and I both believe CNN is less biased than FOX this year. We are more likely to get neutral coverage out of CNN than we are of FOX, and we’re more likely to get distortion out of FOX. That’s just a fact.”

- Clinton: Relishing un-polarizing world at State -
SECRETARY OF STATE HILLARY CLINTON SPOKE THURSDAY AT THE CONFERENCE OF AMERICAS: “I remember it very well when my husband announced in this building somewhere but not in this brand new conference center that the United States would host the first ever gathering of democratically elected leaders from throughout the Western Hemisphere. He talked then about our unique opportunity to build a community of free nations, diverse in culture and history, but bound together by a commitment to a responsive and free government, vibrant civil societies, open economics and rising living standards for all of our people.”

- West channels McCarthy, Van Hollen calls him out -
CHRIS VAN HOLLEN RESPONDED TO COMMENTS BY ALLEN WEST ON COMMUNISTS IN CONGRESS: “I think Allen West is well known for his ridiculous and outrageous comments and I will leave it at that.”

At the 2004 Democratic National Convention, John Edwards delivered a speech titled “Two Americas,” in which he outlined his views on the social stratification of America. Touching upon health care, education and taxes, Edwards described the country in terms of the haves and have-nots.

The “Two Americas’ phrase became a repeated theme in the 2004 campaign as Edwards ran as vice president on the John Kerry ticket.

After the Kerry-Edwards ticket lost, Edwards continued to use the phrase.

“Today ... we see a harsher example of two Americas,” Edwards said after Hurricane Katrina. “We see the poor and working class of New Orleans who don't own a car and couldn't evacuate to hotels or families far from the target of Katrina. We see the suffering of families who lived from paycheck to paycheck and who followed the advice of officials and went to shelters at the Civic Center or the Superdome or stayed home to protect their possessions.”

Since then, Edwards has suffered an epic fall from grace. After fathering a child with his mistress, Rielle Hunter, Edwards now faces six criminal counts related to nearly $1 million in secret payments to hide the affair and child.

After years of delays and disagreement, jury selection at the Greensboro, North Carolina, court begins Thursday.