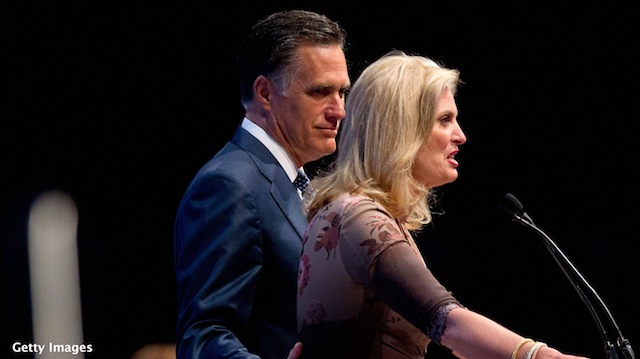 (CNN) - Mitt Romney made his first public remarks Friday on the controversy over a top Democratic strategist criticizing his wife for her past as a stay-at-home mother.

While speaking at the National Rifle Association's annual meeting in St. Louis, the likely GOP presidential candidate introduced Ann Romney as "a hero of mine."

"I happen to believe that all moms are working moms, and if you have five sons, your work is never over," Romney said, as his wife joined him on stage.

Hilary Rosen, longtime Democratic analyst and a CNN contributor, sparked an uproar when she argued Wednesday that Ann Romney was out of touch with most working moms and had "never worked a day in her life."

Leaders from all over the political spectrum, including President Barack Obama, swiftly hit back, with many of Rosen's friends even publicly scorning her comments.

Romney's surrogates also pounced on the remarks and held a conference call lambasting Rosen, while Ann Romney herself took to Twitter to respond followed by an interview on Fox News.

Apologizing on Thursday, Rosen said she meant to imply that because of the Romneys' wealth, the couple could afford to have one parent at home, unlike many families in the still struggling economy.

After her husband's brief introduction Friday, Ann Romney took the opportunity to speak out on the issue.