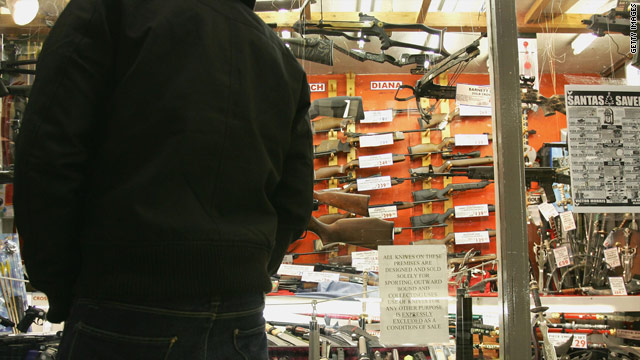 (CNN) – America's gun laws, brought into sharp relief this spring after the fatal shooting of an unarmed teenager in Florida, will be the focus of likely GOP nominee Mitt Romney Friday at the annual meeting of the powerful National Rifle Association.

Romney, who is slated to address the gathering along with long shot candidate Newt Gingrich and former Republican hopeful Rick Santorum, will be tasked with convincing guns rights activists that his moderate record on the gun control in the past isn't reflective of his current positions.

During his 1994 bid for the U.S. Senate in Massachusetts, Romney asserted his positions "don't line up with the NRA," a stance likely meant to appeal to the Bay State's moderate Democrats who could have helped him defeat Sen. Edward Kennedy.

During a 2007 appearance on NBC's Meet the Press, Romney modified his stance somewhat, saying "I support the work of the NRA. I'm a member of the NRA. But do we line up on every issue? No, we don't."

As governor of Massachusetts, Romney signed a 2004 extension of a ban on assault weapons, at the time saying "These guns are not made for recreation or self-defense. They are instruments of destruction with the sole purpose of hunting down and killing people."

Later in his term, Romney took a friendlier stance on guns, enacting a statewide "Right to Bear Arms Day." In 2006, ahead of his bid for the 2008 Republican nomination, he became a lifelong member of the NRA. During that election, he remarked that he sometimes hunts "small varmints."

On his campaign website, Romney's platform is spelled out without mentioning any specific proposals for new legislation.

"Mitt will enforce the laws already on the books and punish, to the fullest extent of the law, criminals who misuse firearms to commit crimes," the website reads. "But he does not support adding more laws and regulations that do nothing more than burden law-abiding citizens while being ignored by criminals."

Romney's appearance comes after a relatively quiet period of gun related legislation at the federal level.

Despite several high profile gun incidents during in his presidency, including the Martin shooting and a massacre in Tucson, Arizona that left former Rep. Gabrielle Giffords seriously injured and six others dead, President Barack Obama has done relatively little in terms of advancing restrictions on gun ownership.

Several months after the Tucson shooting, Obama published an editorial in the Arizona Daily Star asserting "our focus right now should be on sound and effective steps that will actually keep those irresponsible, law-breaking few from getting their hands on a gun in the first place."

However, the White House did little beyond the editorial to advance new gun laws.

More recently, the shooting of Trayvon Martin, an unarmed seventeen-year-old in Sanford, Florida, has reignited a debate about gun ownership in America. Martin was shot by George Zimmerman, a neighborhood watch volunteer who was arrested and charged Wednesday with second degree murder.

Authorities originally said they could not arrest Zimmerman under Florida's "stand your ground" law, which allows people to use deadly force to defend themselves anywhere they feel a reasonable fear of death or serious injury.

The NRA, along with the American Legislative Executive Council, worked to enact the "stand your ground" law in Florida, and was active in getting the measure on the books in 25 other states.

The organization hasn't publicly commented about the Martin case and the use of the "stand your ground" provision.

Obama made starkly personal comments about the case in March, saying "If I had a son, he would look like Trayvon." He also said laws, including the "stand your ground" provision, needed to be reexamined.