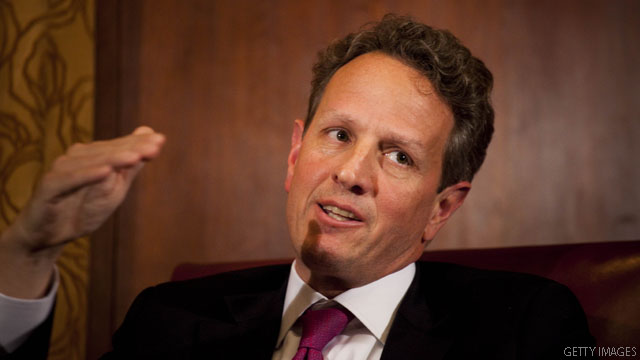 Geithner said Romney's premise that 92.3% of the jobs lost in the country were among women has been debunked, adding that men, women and families alike have been hurt by the economy.

"It's a ridiculous and deeply misleading look at the economy," Geithner said on NBC's "Meet the Press." "Remember the recession and the crisis started at the beginning of 2008 before the president took office. It caused a huge amount of damage to men, to women, to families. And the damage lasted for a time, and you're still seeing the scars of that."

Both sides of the political aisle have accused their opponents of waging a "war on women." The latest round of attacks came from likely Republican presidential nominee Romney who has repeatedly blamed Democratic policies for a spike in female job losses.

But Geithner said the crisis "hurt everybody," particularly men in the form of construction and manufacturing jobs in 2008 and later women in the form of state and local government jobs, as well as teaching positions.

The number of non-farm employed women from January 2009, when Obama took office, to March 2012 did fall far more than the number of employed men in that period, proving the 92.3% figure. However, since February 2010, women have actually gained 863,000 jobs.

The statistic also does not reflect that men constituted a much larger chunk of the job loss pie in the year leading up to Obama's inauguration.

Geithner pointed to the 2008 start date of the downturn, before Obama took office, to help prove his point that the president is now leading the country toward economic growth.

"The president's policies are making the economy stronger," Geithner said on ABC's "This Week." "And the alternatives proposed by his opposition would be devastating, not just to the safety net, but to investments in education, be very damaging to the economy."