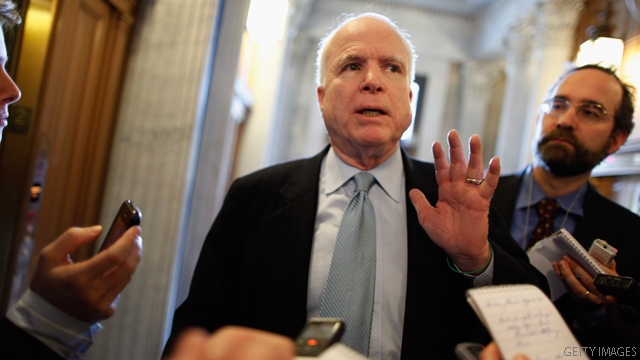 (CNN) – Republican Sen. John McCain on Sunday said Mitt Romney will be able to bridge the gender gap in the next election given that women, as the candidate's wife said, care most about the economy.

"I do believe that Ann Romney was right when she said the women she talks to and the women I talk to, traveling around my state, are interested in jobs and the economy," McCain, a Romney backer, said on CBS' "Face the Nation." "There's no doubt that a lot of women have been hurt very badly in this recession. And jobs and the economy is their number one priority."

The former 2008 Republican presidential candidate's comments came days after Democratic strategist Hilary Rosen ignited a firestorm when she said Ann Romney had "never worked a day in her life." Rosen later apologized, but that did not stop pundits and politicians from seizing on the remark to make their respective political points largely in an effort to play to the female vote ahead of the 2012 election.

A recent poll from ABC News/Washington Post showed President Barack Obama leading Romney among women, 57% to 38%, despite his single-digit lead over the former Massachusetts governor in a hypothetical general election match-up.

But McCain, Arizona's senior senator, said Romney's economic proposals will play to women who are focused on "feeding their families and being able to stay in their homes."