(CNN) – The story has been floating around for months on the campaign trail, but Mitt Romney and his wife Ann have largely avoiding discussing the fate of their Irish Setter Seamus, who the now-candidate put in a kennel and strapped to the roof of his family's station wagon for a trip to Canada in the 1980s.

On Monday, the couple addressed the story head on, saying in an interview with ABC News that the tale of Seamus was clouded with misinformation.

END_OF_DOCUMENT_TOKEN_TO_BE_REPLACED

Santorum hasn't yet talked to Romney

(CNN) – Rick Santorum, who announced last week he was dropping out of the contest for the Republican presidential nomination, said on a conference call with supporters Monday he hasn't spoken with the likely victor of that race, Mitt Romney.

"As far as involvement with a particular presidential candidate, I had a chance to talk to Newt [Gingrich], I haven't had a chance yet to talk to Gov. Romney, but we'll be talking to both of them and we're going to go out and do what we believe is in the best interest of our country," Santorum said on the call, which an organizer said reached more than 4,000 of Santorum's supporters.
END_OF_DOCUMENT_TOKEN_TO_BE_REPLACED

(CNN) – A proposal to implement the Buffett Rule was blocked in the Senate on Monday, but proponents of the millionaire tax vowed to keep the issue alive in the months ahead.

Republicans, as expected, garnered enough support to reject Democrats' attempt to bring up the proposal for debate. The Democrats fell nine votes short.

Washington (CNN) – In the latest sign that Mitt Romney is looking ahead to the general election, the former Massachusetts governor will appear at the Republican National Committee's meeting later this week in Arizona, a spokesman for the Romney campaign tells CNN Monday.

Romney is scheduled to address the gathering of state Republican chairmen Friday – the same day that Sen. John McCain, R-Arizona, is scheduled to speak. The three day political meeting is being held in Scottsdale.
END_OF_DOCUMENT_TOKEN_TO_BE_REPLACED

BREAKING: The Secret Service has revoked the security clearances of 11 employees accused of bringing prostitutes to a Colombian hotel ahead of President Barack Obama's weekend summit trip, two government officials with knowledge of the investigation told CNN’s John King.

JUST IN: Romney tells Obama to "start packing," as the presumptive Republican presidential nominee criticized the president’s economic policies, in an ABC interview. Ann Romney, who joined her husband for the interview, also sought to clarify her comments last week in which she described the controversy about being a stay at home mother as a “birthday gift.”

END_OF_DOCUMENT_TOKEN_TO_BE_REPLACED

Romney: Don't divide based on wealth

(CNN) – Mitt Romney said Monday that persistent questions about how well he relates to middle class voters were reflecting of a diversion campaign run by Democrats eager to distract from failed economic policies.

"We don't divide America based upon success and wealth and other dimensions of that nature," Romney said in an interview with ABC News, excerpts of which were posted online. "We're one nation under God. We come together. This is a time when people of different backgrounds and different experiences need to come together."
END_OF_DOCUMENT_TOKEN_TO_BE_REPLACED 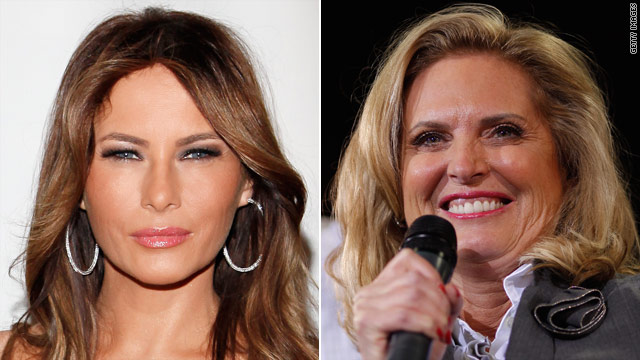 Mrs. Romney is the guest of honor at a birthday fundraising event Tuesday in New York City for the campaign, hosted by Donald Trump's wife, Melania.
END_OF_DOCUMENT_TOKEN_TO_BE_REPLACED

(CNN) - President Barack Obama holds a nine-point lead over Republican challenger Mitt Romney thanks in part to the perception that the president is more likeable and more in touch with the problems facing women and middle class Americans, according to a new national poll.

A CNN/ORC International poll released Monday also indicates a large gender gap that benefits Obama, but the public is divided on which candidate can best jump-start the economy.