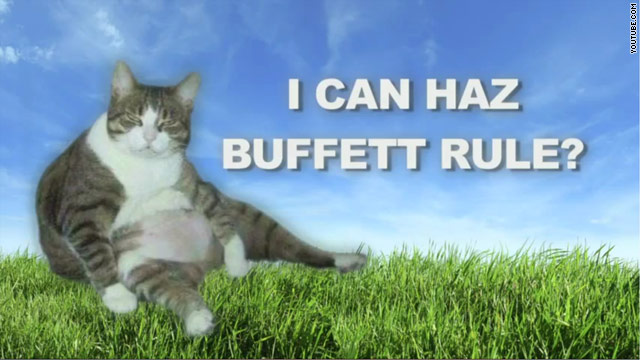 (CNN) – The liberal MoveOn.org took on Mitt Romney's opposition to the "Buffett Rule" through a play off the Lolcats meme in a new ad released Monday, according to the group.

The 30-second spot, set to run on cat-themed Animal Planet programming, accuses Romney of letting "fat cats rig the system" through a series of images that show large felines on a private jet and swimming in money, among other rich-themed scenarios.

"When the wealthiest one percent pay a fair tax rate like the rest of us it keeps the American dream alive for everyone," the narrator in the commercial said. "So tell Mitt Romney, kittens are cute. One percent fat cats who won't pay their fair share? Eh, not so much."

Although the independent organization would not disclose the size of the ad buy, they said the spot would run on numerous Animal Planet shows, including "Big Cat Diary," "My Cat From Hell," "Cats 101" and 'Too Cute Kittens," coinciding with Tax Day and Monday's Senate vote on the "Buffett Rule."

The provision, opposed by leading Republicans including presumptive nominee Romney, would level a minimum tax rate on high income earners. Proponents of the President Barack Obama-backed measure argue the change would constitute a fairer tax code while opponents of the law point to the relatively low revenue expected from the rule.

Romney has voiced opposition to the bill, named after investor Warren Buffett, calling it a "new source of division" by targeting the most successful in the country.

But MoveOn.org Executive Director Justin Ruben used the ad as a chance to criticize the former Massachusetts governor and former executive as a "fat cat" himself.

"Americans who have been playing by the rules are losing because fat cats like Mitt Romney are playing by a completely different rulebook," Ruben said in a statement. "President Obama's Buffett Rule is a basic first step towards asking fat cat millionaires and billionaires to pay their fair share like the rest of us kitties."

The Republican National Committee continued their criticism of the rule in response to the ad.

"This is just another Obama shiny object designed to distract from his failure to turn the economy around," press secretary Kirsten Kukowski said in a statement. "Raising only enough money to run the federal government for 11 hours, President Obama has been unable to sell the tax gimmick even after holding over twenty events to do so and liberal groups pulling out all the stops."

Team Romney did not respond to a request for comment.