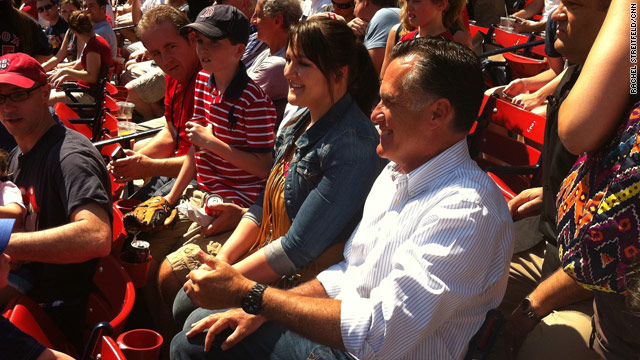 Boston (CNN) - The temperature was pushing 76 degrees under blinding sunshine and the score was tied at 0 when Mitt Romney took his seats in the foul ball territory at Fenway Park.

Accompanied by his son and grandson, Romney waved to onlookers and gave a thumb's up before settling in to watch the Boston Red Sox's traditional Patriots' Day game.

The game, which coincides with the Boston Marathon, falls on a local holiday that commemorates the revolutionary battles at Lexington and Concord.

Red Sox fans seated around the former Massachusetts governor said they had seen Romney at past games. One pleaded to him: "Please save our country."

In addition to his family, Romney's campaign had offered supporters the chance to fly to Boston and watch the game with the GOP presidential candidate. The winners included Matthew, a 48-year-old supporter from New Hampshire and Alexandria, a 19-year-old from California, according to a campaign official.

The group came down to their seats near third base at the top of the fourth inning. Romney wore jeans and a button down shirt with the sleeves rolled up.