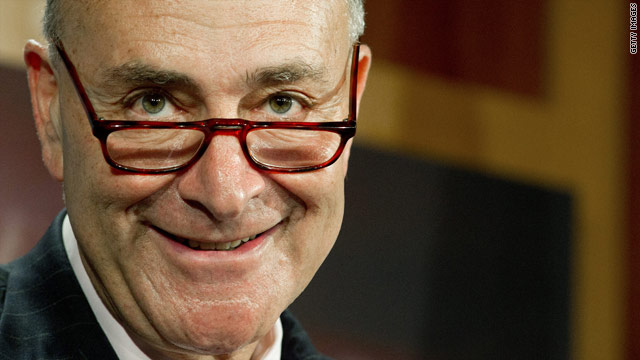 (CNN) – Mitt Romney's suggestion at a Sunday closed-door fundraiser of eliminating one federal department and scaling back a second was a "hot mic moment," Democratic Sen. Charles Schumer of New York said Monday.

Romney's campaign characterized the candidate's comments - overheard by reporters on a sidewalk as he spoke in a Palm Beach, Florida back yard - as ideas, rather than policy proposals.

"I'm going to take a lot of departments in Washington, and agencies, and combine them. Some eliminate, but I'm probably not going to lay out just exactly which ones are going to go," he said, according to a report by NBC News. The Department of Housing and Urban Development "might not be around later, and the Department of Education would be "a heck of a lot smaller," he said, according to The Wall Street Journal.

Schumer sought to capitalize politically on the overheard remarks during a conference call organized by the Democratic National Committee. He told reporters the candidate was embarrassingly honest in his comments, which go beyond the plan he outlines on the stump.

"Now it's safe to predict that this was a hot mic moment that will linger for Governor Romney," he said. "Everyone knows that Mitt Romney has had his share of gaffes in this campaign. But in this case, it was not misspeaking. This was a raw moment of candor where he gave his unvarnished views."

A spokesman for the President Barack Obama's reelection campaign said Romney's comments should be seen in the context of a closed door meeting and made by a candidate with a "penchant for secrecy."

"Americans expect the opportunity to be able to evaluate candidates based on their records and their policies," Ben LaBolt told CNN National Political Correspondent Jim Acosta. "To be able to lift up the hood and kick the tires and make that determination before election day and what is clear is that Gov. Romney is trying to make the specifics of his policies off limits for the American people."

Before the call, Romney campaign spokeswoman Andrea Saul emailed reporters that "it's ironic the Obama campaign would accuse anyone of not being forthcoming," considering Congressional hearings held Monday into apparent extravagant spending by the General Services Administration under the Obama administration.

It was Romney's campaign which last capitalized on a so-called open mic moment, when reporters heard President Barack Obama telling Russian President Dmitry Medvedev he would have more "flexibility" after the November election.

"The idea that our president is planning on doing something with them that he's not willing to tell the American people before the election is something I find very, very alarming," Romney said on CNN's "The Situation Room."

Romney also called Russia the United States' "number one geopolitical foe," a remark which drew rebuke from the Russian president himself.

"Mitt Romney probably hoped these comments would never leave his backyard fundraiser," Schumer said. "They're going to reverberate in the campaign for time to come."