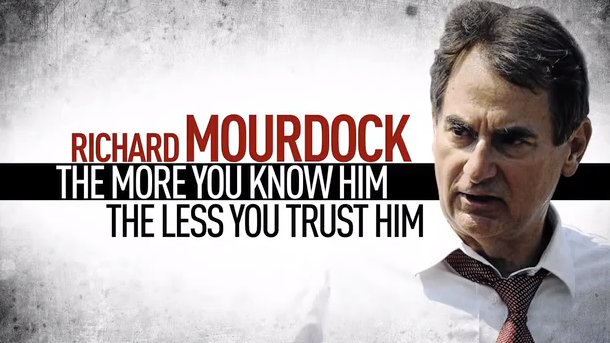 "Richard Mourdock: the more you know him, the less you trust him," the ad's narrator said.

The commercial also argued Mourdock "conveniently decided" to pay back the taxes once he decided to run for the Senate seat (although the word "candidate" was spelled incorrectly in the ad).

“Homestead fraud causes taxpayers who follow the law to pay more money to support local police and fire protection among other local services,” Lugar spokesman Andy Fisher said in a statement. “Voters have the right to question if the state treasurer didn’t care, was incompetent or a tax cheat.”

The two candidates are locked in a tight race ahead of the May 8 GOP primary, as Mourdock, with a heavy tea party backing, and other conservative groups attempt to oust Lugar from his six-term reign in the Senate.

News of the tax error made headlines last year, when Mourdock said he attempted to solve the problem earlier but his paperwork had been lost by the state. On Friday, campaign spokesman Christopher Conner provided documents showing the Marion County Auditor's Office had in fact taken responsibility for not removing the error when requested by Mourdock.

"Sensing that they are losing this race, Senator Lugar is now personally attacking Treasurer Mourdock with false claims," Conner said. "It is ironic that Lugar, who hasn't owned a home in Indiana since 1977, wants to discuss personal property issues."

Lugar opponents have tried to discredit the senator's re-election eligibility by highlighting the fact he hasn't lived in the state since he started working in the Senate 35 years ago. The Indiana Election Division, however, ruled in February that Lugar's situation was legal due to a loophole in the state's election law that states someone does not need to maintain residency in the state while serving in its capacity.

As for the homestead tax deduction, Mourdock addressed the issue in the summer of 2011. The candidate told local TV station WTHR that he had already paid "all the back taxes in excess of what they normally collect in this situation," adding that he was not trying to hide anything.

"The reality is I ran for re-election last year as state treasurer. If I had known before that election I would have gone in, I mean, if you want to take that line of thinking that I was trying to hide the fact, believe me it would have been just as damaging to me politically last year as this year," he said. "I fixed it at the first opportunity the exact day I found out about the problem. If I had found out about it in 2008, 2009 or 2010 I would have dealt with it the same day."

Romney ready for November fight: 'It’s going to be fun'