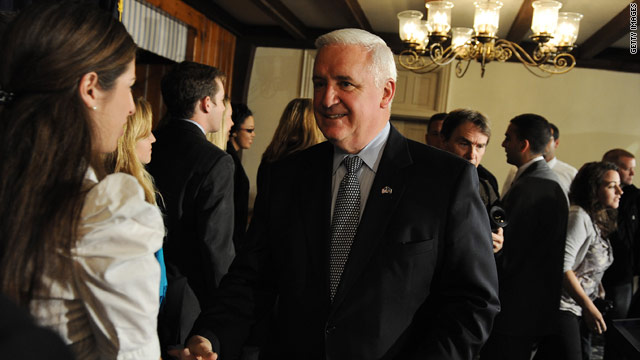 (CNN) – As Mitt Romney increasingly looks toward the general election, the likely GOP nominee announced endorsements Tuesday from the Republican governors of Pennsylvania and Wyoming.

Pennsylvania Gov. Tom Corbett said he was "heartily endorsing" Romney because of his "bold conservative vision."

"Our country needs a president who will reverse President Obama's failed policies and ensure an opportunity for all Americans to prosper," he said in a statement. "Mitt Romney will restore fiscal sanity to Washington by cutting spending, lowering taxes, and reforming entitlements."

Corbett received Romney's endorsement in his 2010 gubernatorial bid, as well as that of fellow Keystone-stater Rick Santorum, who bowed out of the presidential race a week ago. The state votes alongside a handful of others on April 24.

Wyoming Gov. Matt Mead, whose state caucused in February, also endorsed Romney on Tuesday, praising his "breadth of experience and knowledge of the economy."

And in Washington, Romney was endorsed by House Speaker John Boehner of Ohio and Senate Minority Leader Mitch McConnell of Kentucky.