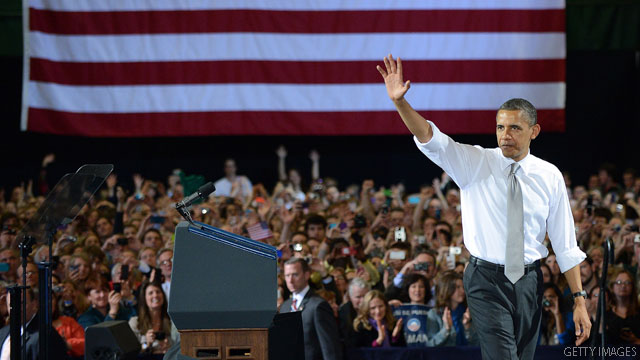 (CNN) - President Barack Obama's re-election campaign is going up with what they say are the first in a series of Spanish language television and radio commercials.

The re-election team announced Wednesday that the ads will run in Colorado, Nevada and Florida, three battleground states with lots of Spanish speaking voters that both Democrats and Republicans will likely heavily court ahead of November's presidential election.

According to the campaign, the spots feature "first person accounts from Obama for America organizers sharing their personal stories of how the president's policies have empowered Latino families and communities."

The campaign adds the release of the commercials coincides with the launch of Latinos for Obama, which the campaign describes as the "largest ever national effort to engage Latino Americans in their communities and involve them in the upcoming election through voter registration, volunteering and voting."

According to exit polls from the 2008 presidential election, Obama won 67% of the Hispanic vote, compared to 31% for Sen. John McCain of Arizona, the then-GOP presidential nominee.

A Pew Research Center poll released Tuesday indicates that while the president holds a narrow 49% to 45% advantage over all but certain Republican nominee Mitt Romney in a November showdown among all Americans, among Hispanic voters Obama holds a 30-point lead, 67% to 27%.