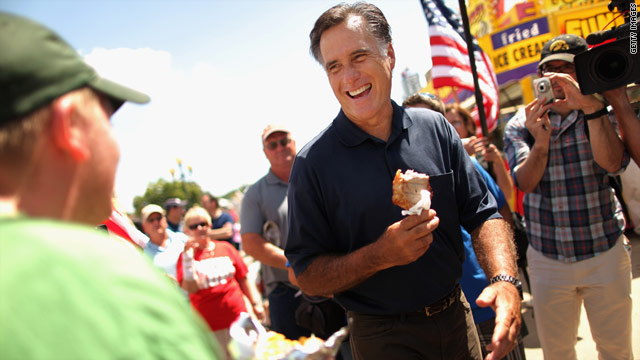 The presumptive GOP nominee brushed off a question about President Obama eating dog meat as a child in Indonesia, telling a conservative radio host: "This campaign is going to ultimately become about jobs, not dogs."

Romney's response came a day after reports went viral that the president had eaten dog as a young boy in Indonesia. The story - published Tuesday by the conservative news site The Daily Caller - was a childhood story which Obama originally revealed in a 1995 memoir.

The hubbub gave Republicans an opportunity to push back against another dog-related storyline: criticism of Romney for once transporting his dog, Seamus, in a crate strapped to the family car during a trip.

Democrats have gleefully used that story as an opportunity to paint Romney as removed and out-of-touch. In January, Obama senior strategist David Axelrod tweeted a photograph of Obama riding in a car with his Portuguese water dog, Bo, with the words: "How loving owners transport their dogs."

On Tuesday night, Romney senior strategist Eric Fehnrstrom joined the dogfight, retweeting Axelrod's original missive but adding the snapshot of Obama and his dog was: "In hindsight, a chilling photo."

"Are you a little bit embarrassed by the so-called lame stream media spending its time on Seamus your dog and, it hasn't broken yet big time nationally about the president when he was known as Barry Sotero eating dogs in Indonesia. Is that the level of the campaign that we have?" Cunningham said.

Romney quickly turned the conversation back to his economic message.

"You know, I think this campaign is going to ultimately become about jobs not dogs," he said. "Look, you recognize, of course, that some members of the media and certainly the DNC and the White House itself, are going to do everything in their power to divert the attention of the voter from the failure of the president to turn around the economy."