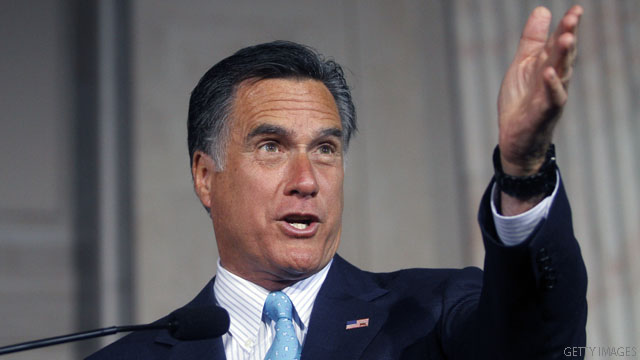 Romney: Obama should 'suck it up'

(CNN) - Mitt Romney drew new contrasts with President Barack Obama on Wednesday by targeting the president's fondness for golf and vacations with his family.

"I must admit, I scratch my head at the capacity of the president to take four hours off on such a regular basis to go golfing," Romney told WLW Radio in Cincinnati, responding to a question about the president's hobbies. "I would think you could kind of suck it up for four years particularly when the American people are out of work."

When asked about vacations taken by the Obama family, who travel to the president's native Hawaii annually, Romney said his family would not use four or eight years in the White House to "see the world." Instead, the former Massachusetts governor said he would frequent Camp David, the presidential retreat in the Catoctin Mountain Park of Frederick County, Maryland.

"I think one of the great resources that the president enjoys is Camp David," Romney said, after the host referenced a recent trip by Obama's eldest daughter Malia to Mexico. "I would anticipate if I were fortunate enough to become elected president that I'd be spending some time at Camp David, and my family and I would not be jetting around the world and using four years in office to see the world."

Obama has admittedly not used the grounds as much as his predecessors but is scheduled to host the G-8 summit there in May.

"Somebody pointed out that I hadn't had any of my counterparts, who I've worked with now for three years, up to Camp David," Obama told reporters in March. "I think that the weather should be good that time of year."

Team Obama did not immediately respond to a request for comment following Romney's interview.